HHLA rail subsidiary Metrans is an important European provider of intermodal container transportation in seaport-hinterland traffic and is one of the pioneers of the rapidly growing railway transport along the New Silk Road. In the past year, Metrans has increased the number of container trains travelling between Europe and China by 114 percent.

The volume and frequency of rail freight traffic between Asia and Europe has increased significantly in recent years. The coronavirus pandemic and resulting capacity bottlenecks in shipping have given an added boost to rail transport links. According to the estimates of management consultancy Roland Berger, around 878,000 standard containers (TEU) were transported along the various rail corridors of the New Silk Road in 2020. The international railway organisation UIC assumes this number could double by 2025.

HHLA subsidiary Metrans is also benefitting from this trend. The intermodal company operated 913 trains in 2020 (2019: 426 trains) that originated in or went to China. This is an increase of 114 percent, with imports recording the largest growth (+131 percent). The transport volumes of Metrans on the New Silk Road are thus approximately 30,000 TEU. 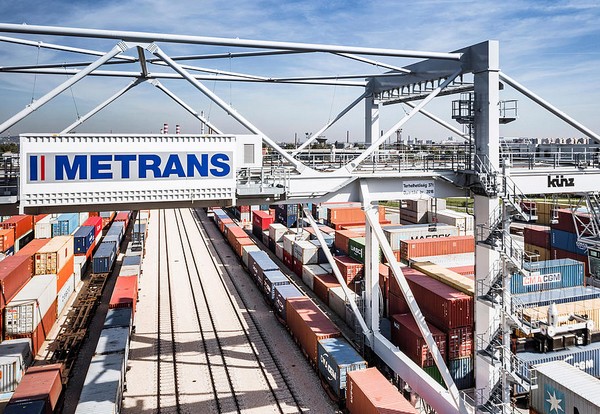 Metrans CEO Peter Kiss: “30 years ago we began transporting sea freight containers to the European hinterland. Metrans offered the first regular shuttle train connection between Hamburg and Prague. Since this time, our network between European ports and its hinterland has grown every year. Additionally, we are one of the largest providers in the fastest growing market: rail transport between Europe and China.”

Customers can now select numerous destinations across China as their start and end points. Currently, 60 to 80 Metrans trains per month connect Europe with key economic centres in the People’s Republic, including Zhengzhou, Xi’an and Jinhua. Together with partners, Metrans assembles the block trains in China that are taken over by traction operators at the various hubs of the Eurasian rail corridor. These hubs are the Polish border terminal Malaszewicze (near the Belarusian city of Brest) and the Slovakian terminal in Dobra (near the Ukrainian border). The containers are then distributed throughout the entire Metrans network.

The Port of Hamburg represents the central hub of Sino-German trade, for both the continental and maritime Silk Road. More than half of Germany’s foreign trade with China is handled via the Free and Hanseatic City of Hamburg. The lion’s share of this figure is seaborne. In 2020 alone, more than 2.4 million TEU were handled on the quaysides of Germany’s largest seaport. 15 liner services connect the Free and Hanseatic City of Hamburg with Chinese ports. In Hamburg, the quayside and rail facilities are in close proximity to one another. As Europe’s largest railway port, Hamburg also offers a dense network of wagon load traffic as well as shuttle and block train connections. Every week, almost 1,960 train departures to and from Hamburg are offered, including more than 230 weekly connections with China.