South African grapefruit production has only increased marginally when compared with the other citrus varieties such as lemons and late mandarins, specifically in the northern region of South Africa where +/- 88% of the grapefruit is grown. The later export regions supply volumes estimated for the Western Cape at +/- 9.27% and Eastern Cape only at +/-2.67% of the total SA grapefruit crop for 2021 season.

Shipments of grapefruit from South Africa started earlier this season, this is due to good market conditions where Turkey and Israel are out of the markets earlier and only small volumes from Corsica were available which are commanding a high price.

“The first arrivals in Europe arrived from week 17 with small volumes at first before the bigger volumes arrive as the season progresses from week 20 onwards. The wholesale markets in the EU and the UK are still at between 10-25% of what they would normally be and will remain under pressure for a while, so exporters will have to rely on the retail trade,” according to Marius Deyzel from Delmar Direct Marketing.

“Japan in particular is looking very promising as the market is empty, and the Southern Hemisphere South African fruit can fill the gap created by irregular shipping schedules and delays from Northern Hemisphere. South Africa has a good shipping connection with Japan and vessels are already on the way. The Middle Eastern markets are tricky due to the timing of Ramadan, when most expats tend to head for home. The market is slow, and the prices are not good, this is due to a better supply and less demand. Turkey and Egypt have fruit stored up to supply this marketing window.”

The early market in China is attractive with good prices in the beginning which will drop as volumes increase. Some of the conventional vessels will stop first in Japan then go on to China.

“The Chinese market continues to surprize with bigger annual demand of volumes and wider range of fruit specifications. The two year average FOT price levels of retail trade in grapes and stonefruit to EU is gives silent optimism, which went well following early shipments, so this bodes well for citrus.” 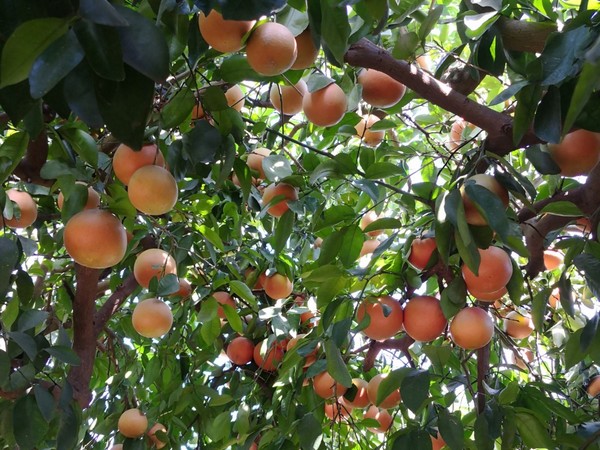 Harvest
Growers have leaned towards picking the ripe fruit from the inside of the trees in recent years as the early markets is perceived to be better, with this already done they are moving toward stripping the trees for the remainder of the fruit as color develops.

“Grapefruit growers had initially anticipated a good medium size range of fruit, but it is becoming apparent that there also smaller sized fruit than first thought. Smaller fruit size means less cartons packed and exported, every size smaller packed equals to 10% less fruit. It will remain to be seen how the fruit from the outer parts of the trees sizes up from the northern regions.”

Another factor to consider is the effects of tropical storm Elouise, which brought much needed rain to the northern region, but also brought high winds.

“In some northern regions there are slightly higher evidence of wind damage on both fruit picked from the inside and outside of the trees the percentage of wind damage is still uncertain. One must understand that whilst the fruit is still green, wind scarring is not that evident, only once the fruit has coloured up and run over the packing line are the downward volume adjustments more clear ”

It is reported that some of the most northern parts of South Africa, grapefruit packing will come to an end in week 19. It is thus anticipated that, the formal industry grapefruit volume estimates will be further downgraded.

"Mother nature and logistical value chain challenges abide, a huge effort to “flatten the curve” by all, to adjust to our market partners’ demands remains in our sights.

“One thing Covid has taught us is never think everything is sorted, you have to keep your eye on the ball at all times and keep talking to each other.”