Lettuce is produced in Norway both in field and greenhouses. In Norway, greenhouse lettuce is one of the most important vegetables grown year-round. In winter 2018, wilting symptoms were observed on soil-grown lettuce of the cultivar Frillice in a greenhouse in southeast Norway (Buskerud county). Affected plants showed stunted growth, wilting of outer leaves, and brownish discoloration of vascular tissues of taproots and crowns. According to the growers, the disease caused an estimated 10% of yield losses.

Scientists at the Norwegian Institute of Bioeconomy Research (NIBIO) isolated fungal pathogen from crowns and roots of diseased plants collected from the greenhouse in 2018 and 2019. Morphological and DNA sequences analyses indicated that the pathogen was Fusarium oxysporum f.sp. lactucae (FOL) race 1. The same results were showed by Koch'postulate. 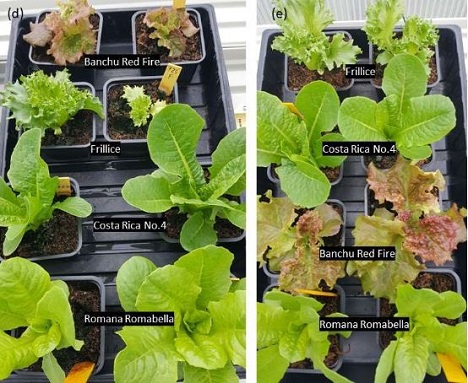 "Race identity was confirmed using the differential lettuce cultivars Costa Rica No.4 (resistant to FOL race 1), Banchu Red Fire (resistant to FOL races 2 and 4) and Romana Romabella (resistant to FOL races 1 and 2) provided by the breeding company Rijk Zwaan (De Lier, the Netherlands). Roots of six 2 weeks old seedlings per cultivar were inoculated by dipping in a spore suspension for 1 min, while controls were dipped in distilled water. Seedlings were planted in 250 ml pots containing fertilized potting substrate and were placed in a greenhouse with temperature ranging from 15 to 35 ⁰C and an average of 23 ⁰C. After 10 days reduced growth was observed in cultivars Frillice and Banchu Red Fire for fungal isolates. After 25 days wilting was observed in both cultivars. Affected plants presented discoloration of vascular tissue. No difference in growth was observed between cultivars Romana Romabella and Costa Rica No. 4 and their respective controls," the scientists explained.

FOL was re-isolated from all inoculated cultivars but not from controls. The colony patterns of the recovered isolates confirmed that the isolate belongs to race 1. Greenhouse lettuce in Norway is mainly produced in hydroponics. FOL is here reported to cause damages in soil-grown lettuce. Nevertheless FOL in hydroponic systems has been reported in Japan in 2003 and Thailand in 2017. Thus, the possibility of infections in hydroponics remain a big concern for lettuce production in Norway.