After a record-breaking sophomore year that is not over yet, Cosmic Crisp® apple’s growth trajectory indicates it will launch to the top of the apple chart in no time. Nielsen data shows monumental growth, reaching #11 in sales dollars in March, and #14 over the 52 weeks ending March 27, 2021. "If retailers do not have a Cosmic Crisp apple program in place now, they are missing out on very important sales and customer expectations," says a release from Superfresh Growers.

“Cosmic Crisp volume is planned to more than double this fall, and double again for the 2022 harvest. This volume will rival current core variety volume, displacing mature varieties that are being replaced with higher color strains and higher flavor varieties,” explains Catherine Gipe-Stewart, Communications Manager. “Cosmic Crisp is rising so quickly, it has potential to become a top-5 variety at this time next year.” 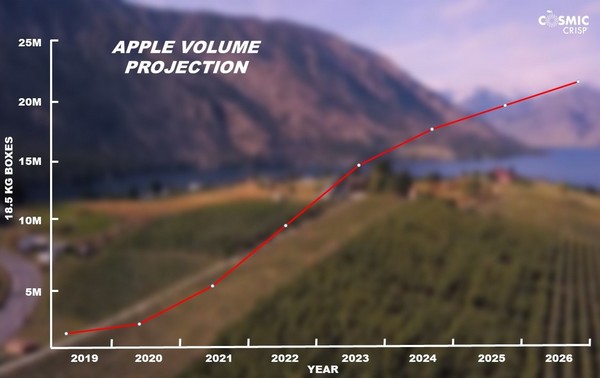 Cosmic Crisp® apple volume projections based on number of trees planted. Click on image to enlarge.

“Historically, apples like Cosmic Crisp take root in the Pacific region, and spread eastward like wildfire,” says Gipe-Stewart. “This was the case with Fuji apple and others.” March Nielsen data shows Cosmic Crisp is already leading in the eighth spot for the Pacific, with $1.2 MM in March sales. Pacific Cosmic Crisp sales are up 814 percent in dollars, and 1096 percent in volume. “We can’t wait to see how Cosmic Crisp transforms the apple category, driving dollar and volume growth,” Gipe-Stewart explains. 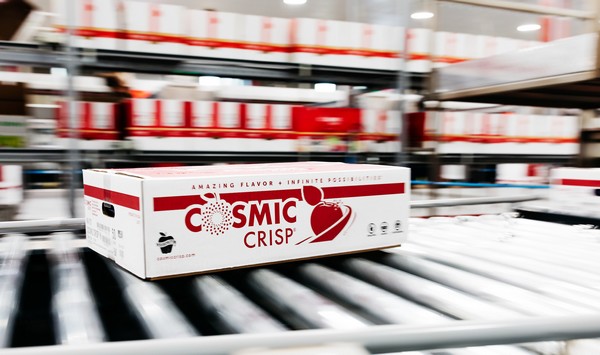 “Feedback has been stellar since the first launch last year,” she continues. “We have seen excellent, storewide execution by some retailers. Cosmic Crisp apple creates an entire consumer experience from the first crunchy bite, to delicious baked goods, and beautiful home decorating. We are seeing consumers get as excited about Cosmic Crisp as we are growing it.”