In its General Assembly, Anecoop presented the results of the 2019-2020 campaign to the representatives of its 72 cooperatives and associated agricultural companies throughout Spain. This year, the meetings with the press and partners were held online.

The president of the entity, Alejandro Monzon, said they had a historic year and great economic results, as they had a record turnover of 770.5 million euro. 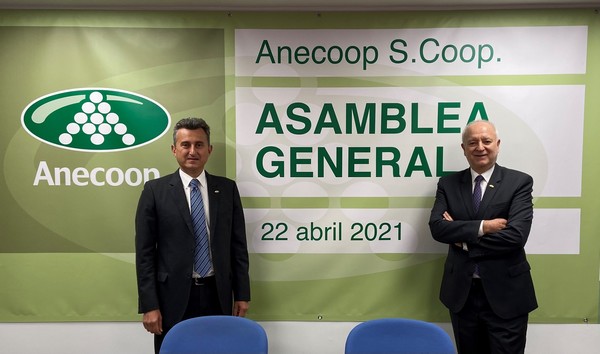 Anecoop's offer includes an extensive range of products including citrus, non-citrus fruits, exotic fruits, fresh vegetables, as well as IV and V Range fruits and vegetables and wines. Anecoop is one of the main citrus fruit operators in the world, with an export quota of 8%, and a leader in the watermelon and kaki export, with quotas of 15% and 45%, respectively.

Fruits turnover increased by 12% and the volume marketed grew by 10.3%. This group had the highest growth in volume within its offer. Bouquet seedless watermelon and the Persimon Kaki contributed to this.

Vegetable turnover increased by 1.7% and the volume marketed decreased by 2.6%; in general, average prices were above the prices achieved last year.

It wasn't a good year for IV and V Range products, mainly because of the closure of the Horeca channel and the replacement of some references by local productions.

The preference for the national product has also influenced the organic segment, which slowed down compared to previous years. In this sense, the cooperative continues to firmly bet on organic and zero waste production, responding to the growing demand for fruits and vegetables that are grown in a more sustainable way.

Main Markets
Anecoop currently exports its products to 81 countries. Europe was Anecoop's main destination market, led by France with more than 181,000 tons. It was followed by the national market with 172,500 tons and Germany, with more than 161,000 tons. Anecoop also exports its products to Italy, Slovakia, Poland, United Kingdom, Czech Republic, Hungary, and Sweden.