Yesterday, Seatrade's Sierra Lara arrived at the Rotterdam Fruit Wharf (RFW) in the Netherlands. "This vessel was additionally deployed. It meets South African exporters' demand for shipping space. There's a shortage of empty reefer containers in Cape Town. Seatrade is a flexible shipping company. That was part of the reason why we could immediately respond to that shortage," says the wharf's Peter van der Laar. 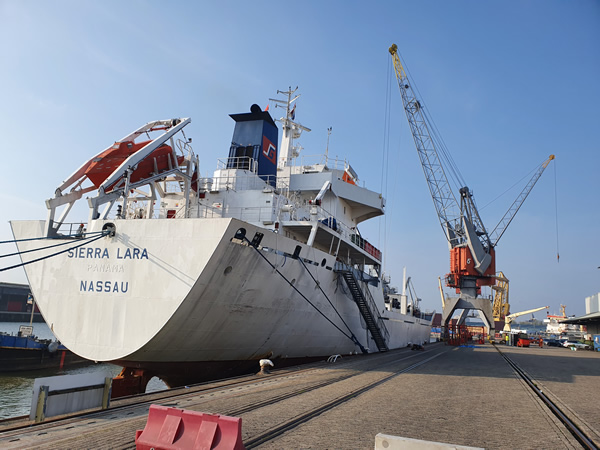 The ship was loaded in Cape Town early this month. It fared directly from there to Rotterdam. That load included 1,371 pallets of grapes, 270 pallets of pears, and 100 pallets of plums. From Rotterdam, the Sierra Lara will sail to Dover. There it will unload the part of her cargo destined for the UK. Next weekend, a second ship will also be loaded with pears and grapes. The MS Baltic Purple will also sail directly to Rotterdam.

"There aren't only these additional vessels. They're being used to bring part of the grape and pear shipment. That's for exporters to northern Europe. There's also the Reefer Alliance's weekly service. This sails from Durban, Port Elizabeth, and Cape Town. These ships go to Rotterdam and St. Petersburg [in Russia]. These will be loaded with citrus. This weekly service will carry significantly more cargo this season."

"Exports and producers have already made fixed program deals. That's with Seatrade and Baltic Shipping. These two shipping companies support the Reefer Alliance. All these ships arrive at the Rotterdam Fruit Wharf's "Fruitport". After unloading,  importers can collect their pallets of fruit in transit. But RFW can also organize official quality controls and customs clearance," concludes Peter.