Onion markets: Analysis of the EU, Central Asia, the Caucasus and Eastern Europe

The Eastern European onion market is in a serious upheaval. Its western market is Poland. To understand in more detail the current situation in Poland, we should look at the situation in the EU as a whole in the 2020/21 season.

Onion market of the European Union and Poland
The total onion production in the EU decreased by 4% in 2020 compared to the previous year to 6.2 million tons, but this was due to a sharp drop in production in Spain. Spain is the largest producer and second largest exporter of onions in the EU, after the Netherlands.

Onion production in Spain fell immediately by 30% in 2020 compared to the previous year and was 20% lower than the average for the previous 3 years. In other countries, production has either been at an average level of the past few years or increased compared to 2019.

This means there was an abundant supply of onions on the EU market, while the demand remained the same or decreased in some segments. Firstly, due to new waves of COVID-19 Pandemic, the demand for onions from the gastronomy sector and processors has not returned to pre-pandemic levels.

Secondly, consumers have realized that eating onions does not help prevent coronavirus infection, therefore, the surge in demand recorded in the spring of 2020 has not been repeated. Thirdly, the demand for onions has also decreased in the traditional export markets for EU producers, and the export of onions to countries outside the EU remains at the level of the previous year. 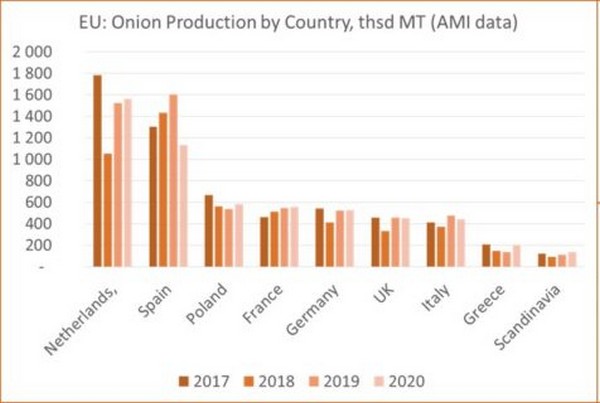 Since the domestic demand has significantly decreased in the EU, price levels depended, among other things, on the export capacity and quality. For instance, Poland exported the same volume of onions in the first half of the 2020/21 season as in the previous season (69,000 tons), although production in Poland increased by 8% compared to the previous year. As a result, although the situation in Poland developed from the beginning of autumn as it did last year, prices were decreasing, and there was no jump in prices in the second half of April, unlike last year.