“We began a little late this year. That was due to the cold weather at the beginning of the year. We usually begin in early March, but this year, it was a month later,” says Pedro Marques from Frutas Classe in Portugal.

He doesn’t yet know the fruit conditions or what their yields will be. But they did lose a month of production. “The current market situation is harsh, with dismal prices.” These low prices are being paid in, mostly, Spain, which is putting tremendous pressure on the market. “It’s been very rough until now.”

“We hope the volumes will increase and that prices stabilize at a higher level in the weeks and months to come,” adds Pedro. Spain is this Portuguese company’s main competitor. “Our products differ, however.”

Temperate climate
“Our climate is quite temperate. That means our strawberries grow slower and are firmer with a longer shelf-life. Even if they are the same varieties, the strawberries’ texture can differ.” The company grows three main strawberry varieties, Rocieras, Fortuna, and San Andreas. All these are cultivated in full soil, both covered and open field.

Pedro says they have a more extended season than Spain. “We have strawberries for most of the year. It’s usually only in January and February that we don’t have this fruit. Here in our area, near of the cost at 100 km north of Lisbon, harvesting peaks just after the middle of the year.”

“It’s a little different from Spain, where it’s March or April. Our crop production is highest from June to August. That benefits us because when the quality of the products from the south starts to fade, our strawberries are still good.”

Frutas Classe mainly sells to Portuguese supermarkets. They also directly supply supermarkets in Poland export to Spain, France and Suisse “We don’t export directly to northern Europe yet,” says Marques. But, export expansion is the company’s main objective. It wants to supply countries like Belgium, the Netherlands, Germany, and the UK. 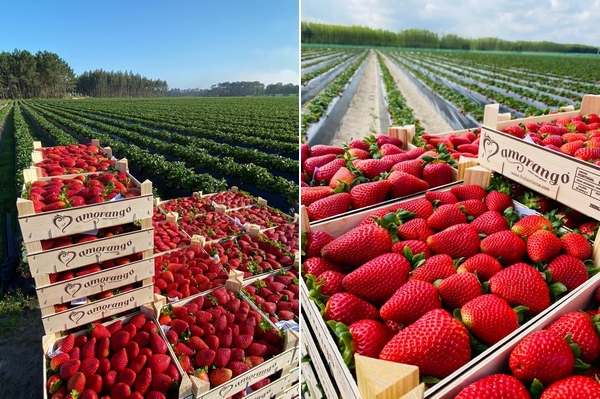 Five-year goal
“Our goal for the next three to five years is to have a partner in each of those countries. They must represent our brand.” The brand - ‘Amorango’ (Love Strawberries) – that won the price “taste of the year 2021” and are already quite well-known in Portugal.

The company sees this expansion as its biggest challenge. “We want to grow our brands and increase our products’. We want to have products available when the other regions’ products’ quality starts declining. For that, our location, and its mild climate, is a big advantage.”

These moderate growing conditions, associate with the respect of the natural resources, especially the use of water, mean Frutas Classe’s strawberries transport well. “The strawberries can reach our European clients in good condition and with an optimum shelf life.” Pedro concludes.