In the past, 90% of Taiwan's pineapple exports were shipped to mainland China. This year, as mainland China banned pineapple imports from Taiwan, the island has been exporting to other countries. However, the quality of exported products varies.

Shipments are made for Canada by air and sea from March. The air-freight products became available in Toronto in late March, and the sea-freight products became available in Vancouver at the beginning of April. Due to shipping delay, it took 21 days for the sea-freight shipments to arrive, making Canada the destination that takes the longest time to ship from Taiwan so far.

It is reported that the quality of the air-freight product is good, but the asking price for a single pineapple is about NT$455, which is not very affordable. Part of the sea-freight shipment shows signs of brown cores due to the delay in transport, and prices in Vancouver are chaotic. According to industry analysis, in addition to the regulation and management during production, it is also necessary to have the ability to master maritime logistics, otherwise, it will be difficult to successfully develop export markets. 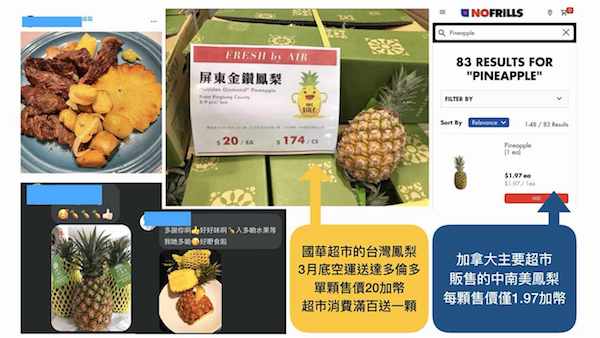 The air-freight pineapples were delivered to Toronto in late March, and consumers’ reactions were mostly positive. Each fruit is priced at 20 Canadian dollars.

The air-freight pineapples were marketed in the Guohua Supermarket in Toronto at the end of March. The fruit was shipped by air to ensure its quality, as the pandemic affected sea-freight shipping schedules and delayed shipping. After arrival, some of the products still had soft and sweet flesh with only a few brown spots after being marketed for three weeks, while a few showed browning signs after being marketed for a week. These products were delivered to Toronto at the end of March, and the consumer response was mostly positive. Each fruit is priced at 20 Canadian dollars.

Another shipment arrived in Vancouver in early April, and a few showed signs of brown cores. It is understood that in the past, a small volume was shipped by air. Last year, due to the sharp reduction in flights brought by the pandemic, the freight costs shot up, resulting in international trade becoming more dependent on sea freight. The shortage of containers and quarantine procedures at the port also made shipping schedules more unpredictable. This shipment took a total of 21 days from being loaded in Taiwan to arriving at the port in Canada, which would take 14 days in the past. 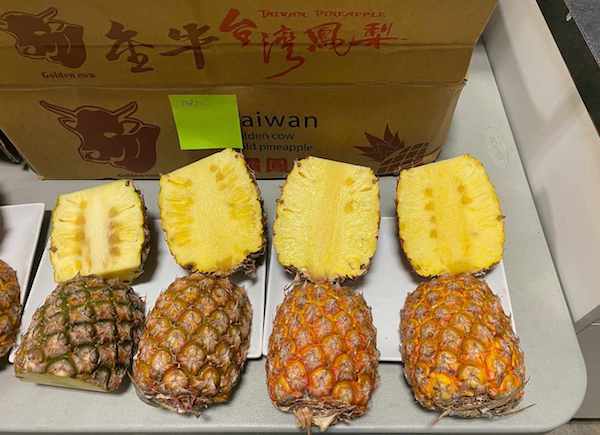 After arriving at the port in April, the fresh fruit is cut open to check the pulp and determine the sugar content (photo courtesy / Taione)

Mr. Lin, an experienced pineapple industry insider, said that pineapples, as a tropical fruit, can be stored for more than 2 weeks in Taiwan’s year-round warm environment. The reason for brown cores is that after staying in a low-temperature environment for a prolonged period of time, the fruit is exposed to a sudden temperature rise after the containers are opened. If the temperature is adjusted to above 13°C, then even if it takes three weeks to ship, the chance of browning will decrease.

Mr. Lin believes that whether pineapples can withstand long-distance transportation is also related to the quality of the fruit. To be exported to different countries, apart from the improvement of transport technologies, production methods must also be different.

What can be done if sailing schedules are unstable or delayed? Mr. Lin said that even if they have mastered the cooling technology, transporting fresh pineapples has its limits. For example, for golden diamond pineapples, the longer the transportation time, the higher the probability of fruit loss. Especially since the pandemic, all shipment time has become difficult to manage. To ensure the fruit quality of pineapples for export, perhaps Taiwan should give priority to exporting to short and medium-distance regions rather than medium and long-distance countries.