The Valencian Association of Farmers (AVA-ASAJA) reacted to yesterday's Senate debate on the fight against the South African cotonet. They denounced the absolute lack of political action at all levels to prevent this plague from arriving into Valencia's citrus sector in 2009, to eliminate it in the few fields where it was detected, and to offer farmers truly effective control tools.

"The catastrophic scope that this pest, which arrived in citrus imports from South Africa, has had on our crops is a consequence of the incompetence of the different administrations and their scandalous refusal to duly meet the demands made by the agricultural sector," stated Cristobal Aguado, the president of AVA-ASAJA.

AVA-ASAJA has been warning for many years of the need to adopt inspections in the countries of origin and to establish a single body of customs in European ports of entry to avoid the increasing introduction of quarantine pests and diseases. They have also demanded more investigation and giving producers enough sustainable alternative products to replace the active ingredients that have been banned to control pests with equally or more effective products. 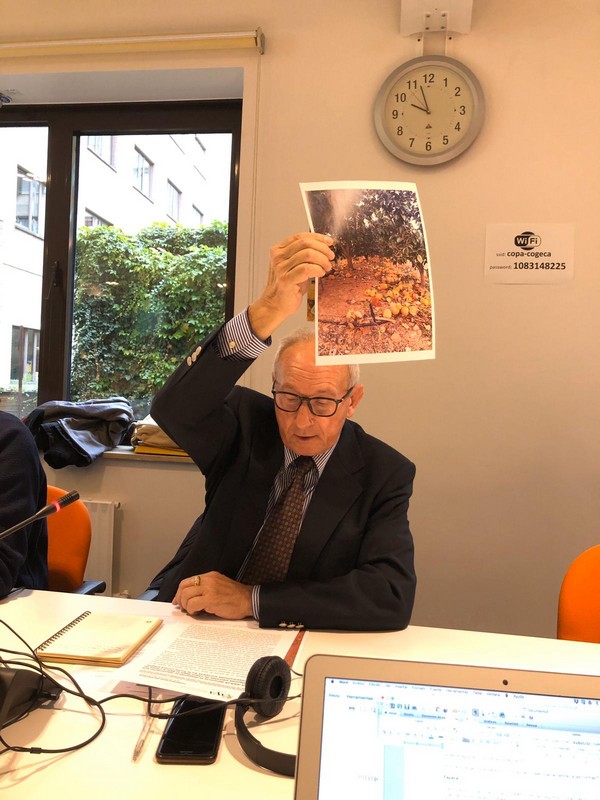 "At the moment, the only feasible option would be to maintain the authorization, on an exceptional basis, of chlorpyrifos and other substances against South African cotonet for the national market. However, we must bear in mind that all other European Union countries would reject our product if they had residues of chlorpyrifos. We export more than 90% of the harvest to the EU, so we must weigh the consequences very well,” he added.

Cristobal Augado, together with the agricultural organizations of the European Union, presented these claims in the COPA-COGECA Working Group on Phytosanitary Issues, in continuous meetings with MEPs from the main political groups, and in the Petitions Committee of the European Parliament. Aguado has also delivered exhaustive reports with all these conclusions to the Directorate-General for Health and Consumers of the European Commission in Brussels.

“It's a shame that small groups of farmers from Castellon went to Madrid yesterday to attract attention and seek their moment of glory. Only the people with no memory can think that this inconsequential act will serve to solve something,” he stated. "There are professional agricultural organizations that have been fighting this injustice for a long time in all political decision-making forums, and we will continue to do so for the benefit of all farmers and ranchers,” he added.