With bottle-necked ships making their way to ports in the wake of the Suez Canal incident, cumulative delays for cargo ships are at 1,017 days, threatening to swamp ports with bottle-necked cargo for weeks to come. With more than 1.9 million TEU (Twenty-foot Equivalent Unit) of capacity involved in the incident, supply chain visibility company project44 is warning shippers that their headaches are not yet over.

At major ports such as Singapore, more than 370,000 TEU of capacity are en route to the port, where 83 vessels representing 299,310 TEU were already at the port or anchored and waiting to unload as of April 12.

The picture is similar at Rotterdam, where 15 ships representing 196,600 TEU will arrive over the next week, lining up behind 85 ships already at port or waiting to enter the port. 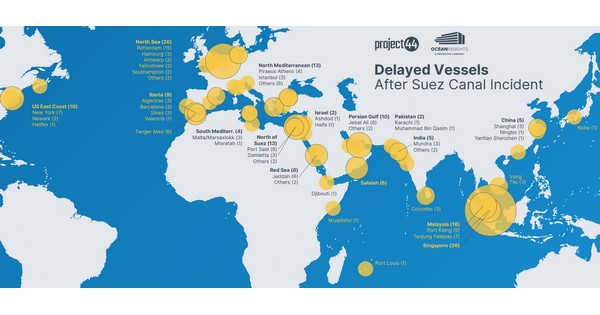 Cumulative delays for cargo ships are at 1,017 days, threatening to swamp ports with bottle-necked cargo for weeks to come. Click photo to enlarge.

Other major ports bracing for the influx of volume are New York, with 76,500 TEU either having arrived or still inbound from the Suez Canal incident; Port Kelang, at 103,900 TEU; and Jebel Ali, at 75,879 TEU.

According to project44’s port delay tracking, the influx will also exacerbate port delays measured in days. With delays on major trade routes like Shanghai--Rotterdam already close to the one-week mark, a worrying increase over 2020, when median port delays on the same route were 2.79 days.

Project44’s ongoing post-incident analysis provides the maritime shipping industry stakeholders with a clearer understanding of the incident, providing the analytical tools to create more robust supply chains in the future.

“The Suez Canal incident brings home the message that shippers must be prepared for unexpected disruptions in their supply chain,” says Josh Brazil, vice-president marketing. “With real-time visibility and advanced alerting capabilities, disruptions as well as the ability to form strategies to avoid them, are more manageable than ever before.”