Almond groves affected by frost all over Italy

Almond groves all over the peninsula have been heavily affected by the late frost of the past few days.

"It is too painful to visit the groves. I do not know if there will be anything left to harvest, as fruits are dropping every day. The external part of the fruits has changed color while the inside, which was still 'jelly-like' and full of water, froze completely. It was supposed to be a record campaign due to the lovely blossoming and extraordinary setting," reported Domenico Casamassima, a producer from Castellaneta (Taranto).

"The straw bales were not enough, as the temperature remained below zero for at least two hours. My produce was damaged last year as well, but the percentage did not reach 15%, while this time I will have to add a few more dozens to that figure."

Giuseppe De Nittis, a producer from the Foggia province, reports a similar situation. "I lost almost 5 hectares of almonds, the damage was total. The young grove was supposed to guarantee at least 2kg of fruits per plant this year. It keeps on happening, especially well into spring. I wanted to plant another 9 hectares, while now I am considering whether to uproot what I have." 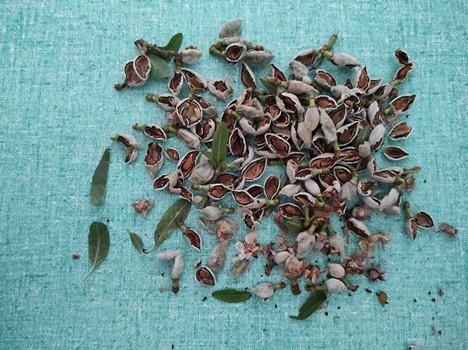 Lazio and Tuscany were also heavily affected. Sergio Marcoaldi from the C.O.P.A. cooperative which gathers over 20 almond growers from north Lazio and south Maremma (240 hectares in total), reports that "the produce will definitely lack this season. We are only left with 20%. Temperatures dropped to -5.5°C, and even reached -6°C in some areas. Before the frost, we were expecting yields of as much as 10 kg/plant for the older orchards."

Bad news are coming in from Basilicata as well, although dried fruit cultivation only started to become popular in the region 2/3 years ago, so there are fewer groves. Gianluca Petrocelli from Montalbano Jonico (Matera) explains that "those fruitlets that had started to appear in young orchards managed with new techniques are lost, although plants show no damage. The percentage of affected plants is high also in traditional groves."