The Office of National Statistics (ONS) has released its latest UK trade data, covering February 2021. Evidence from the Business Insights and Conditions Survey (BICS) suggested that additional paperwork and higher transportation costs were the biggest challenges currently facing UK importers and exports in February.
While this gives us some further indication as to the impact of the end of the transition period, the ONS has stated that other issues still persist and so it is hard to precisely quantify the impacts of EU Exit so far;

‘’Trade patterns are likely to also reflect the impacts of the unwinding of stocks, coronavirus (COVID-19) pandemic restrictions, and lower demand due to the UK and global economic recession. It is too soon to be able to assess to what extent recent trading patterns are short-term or reflect more lasting structural changes.’’ Source: ONS

Contrastingly, exports of meat preparations to Rest of World (ROW) have more than made up losses suffered in January. Exports in February 2021 total £65m, £23m more (+55%) than February 2020 which means that exports for the first two months of the year are now up 13% in total. Despite this, overall agri-food exports in February were lower than the previous year, therefore exports for 2021 are 10% lower year-on-year so far. 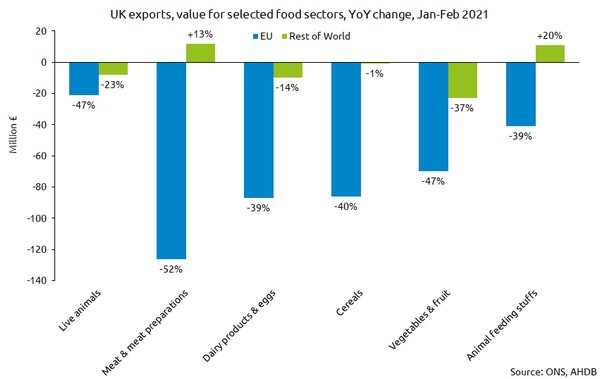 Meanwhile, in the other direction, imports of agri-food products to the UK are also continuing to report lower amounts of trade. The value of food and live animal imports are down 11% (-£673m) for the first two months of the year. The vast majority (£655m) of these declines have come from EU trade, with meat and meat preparations, as well as vegetables & fruit being particularly hit. The announcement last month of the delay to implementing the border control plan will be welcome news to a number of importers. However this could mean that further disruption is recorded down the line when these controls come in: