Yesterday, CPMA’s virtual Fresh Week officially kicked off with a well-attended Keynote session. George Pitsikoulis, CPMA Executive Member and President/CEO of Canadawide interviewed Laurent Duvernay -Tardif, Super Bowl Champion and Graduate in Medicine. The Super Bowl champion elaborated on his decision to opt out of the 2020 NFL season to work in long-term care and fight COVID, but also discussed the importance of a healthy diet. 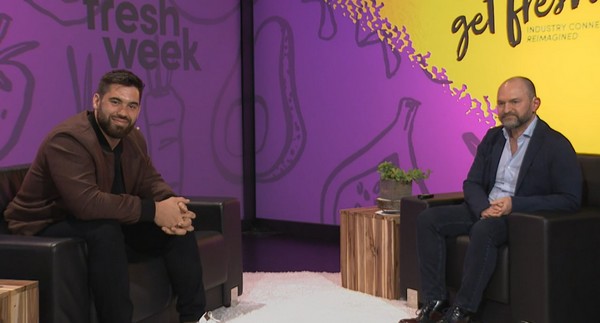 Laurent Duvernay-Tardif is being interviewed by George Pitsikoulis.

Two passions
Duvernay-Tardif grew up in Montreal and as a child he dreamt of being a good football player. He played university football at McGill University in Montreal and in 2014, he was drafted by the Kansas City Chiefs. However, Duvernay-Tardif also had another passion, Medicine. Many people told him he would have to choose between a football career and a career in Medicine as it wouldn’t be possible to do both. “I didn’t want to choose between the two,” he said. “I didn’t want to sacrifice my medical career for football as the average NFL career is 2-3 years. At the same time, I needed football and decided to push two passions.” A schedule was designed that would allow him to fully focus on Medicine for a couple month after the football season had ended. Duvernay-Tardif graduated with his doctorate in Medicine in 2018.

Then, in 2020 Duvernay-Tardif won the Superbowl with Kansas City. “I cannot describe that moment, it was so crazy,” he said. “From winning in Miami, to getting a parade in Kansas City and getting my own parade in Montreal.” However, the euphory ended abruptly. “Within days, the world shut down and I was at home wondering what was happening to me. Then the mindset changed, and I wanted to help.”

Transition to care
“The transition into care was the hardest thing to do. I was parachuted into a new system and started helping out in a long-term care facility in the Montreal area.” Duvernay-Tardif went in as an orderly, caring for people who wouldn’t be able to go back home. “I always pictured myself going back to Kansas City, but a few weeks before the season started, I asked myself if I wanted to play football or care for people and the best thing to do was to stay in Montreal. I didn’t want to say we shouldn’t play football, but for me, my job was here.” He was the first NFL player announcing his decision to opt out, receiving full support from his coach and teammates.

“Knowing I have something else in life than football, makes me feel balanced. That balance is so important to me. In the moment, winning the Super Bowl was a reward for working hard and it’s the ultimate team accomplishment. However, the personal reward and sense of accomplishment of being able to help, stands out most. I want to be remembered for what I’ve done in the field, not for winning the Superbowl.”

Optimizing prevention
Duvernay-Tardif is proud of Canada’s healthcare system being accessible to everyone, but he wants to play a role in promoting health and is hoping to contribute to preventing illnesses like obesity and diabetes. “There is a direct link between prevention and outcome, and I hope we will focus more on prevention in the future. Prevention is cost-effective and I want to contribute to optimizing that.” Duvernay-Tardif strongly believes in a balance between arts, sports, education and eating healthy. “Putting in place a system where you put forward fresh products like fruits and vegetables will help citizens make better choices.”

CPMA Fresh Week continues until this Friday, April 16. Click here for a schedule of events. Registration is free.