The annual production of tomatoes in Italy, including greenhouse and open field productions, exceeds on average 1,000,000 tons from the almost 25,000 hectares a year cultivated between 2016 and 2020. 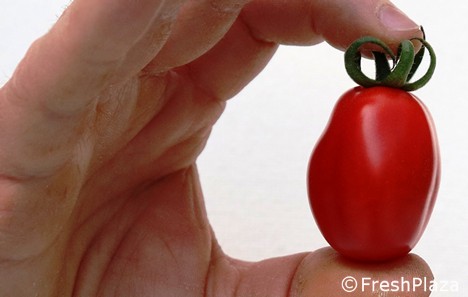 With the exception of a few hectares located in high-tech greenhouses in the north of the country, most of the greenhouse production of table tomatoes occurs in Sicily and, more precisely, in the coastal area between the Agrigento and Syracuse provinces.

The Tomato Brown Rugose Fruit Virus keeps affecting not only Sicilian productions as the disease, identified in Israel and Jordan in 2014/2015, has become global.

In Sicily, the problem manifested in the fall of 2018 and, in the meantime, some companies registered losses of almost 40%. But what has happened in the past few years?

From what emerged during a recent convention on the issue, "it seems there was no alert as regards the possible introduction of the Tobamovirus to Italy. No effective and speedy detection method was available in 2018 and no effective tracking method was provided. At the moment, approximately 45% of companies with protected crops report Tomato Brown Rugose Fruit Virus infections." In the meantime, Sicilian producers are learning to manage the problem, albeit with great difficulty, by perfecting techniques that involve shorter crop cycles, prophylaxes and the use of less-susceptible varieties. There has been talk of new varieties with intermediate resistance (IR), but the problem will be solved only with genetic improvement and the availability of high resistance (HR) varieties.

In the meantime, there are some important news concerning the fight against ToBRFV from the University of Palermo (SAAF Department), which has promoted the "NetLab" project making constant monitoring possible at a low cost. The project consists in creating a network of micro-labs operating within nurseries so that they can self-check plants by verifying the presence of Tomato Brown Rugose Fruit Virus and other pathogens. The experts explained how a validation process compliant with EPPO standards will be necessary. In addition, results and useful suggestions will have to be made available to relevant bodies. Once processed, these results will make it possible to set up a territorial monitoring plan in collaboration with accredited laboratories and specialized mini-laboratories (envisaged by the project) under the direction of the Regional Plant Protection Service.

More recently, with the objective of countering the spreading of and eradicating the ToBRFV virus (Tomato brown rugose fruit virus) in the Sicilian territory, the Regional Plant Protection Service issued a decree that envisages the application of specific compulsory plant protection measures. Such measures for bell pepper and tomato (non-resistant varieties) plants, seeds, and mother plants are to be implemented at the expense of the owners or operators where the harmful organism is present. The provision also applies in cases where the presence of the ToBRFV is suspected yet not officially confirmed. Whoever does not implement the compulsory measures will be fined under art. 55 of Legislative Decree no. 19 of 2 February 2021, which has become effective on 15 March 2021. 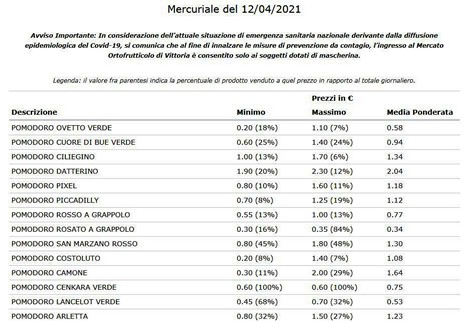 As regards the production prices of table tomatoes, the quotations above were registered at the Vittoria market on 12th April 2021. Small types such as plum (2.04 euro/kg), cherry (1.34 euro/kg) and midi plum (1.18-1.12 euro/kg) tomatoes are doing well. Other segments do not always exceed 1 euro/kg and remain near or even below production prices.