Giant pepper of 555 gram grown in the Arava desert

When sorting the peppers in the packing house in the Arava, Israel, a huge pepper of 0,555 kg was found. Shoham Ben-Ezuz, manager of the packing house, says: “This humongous pepper came from the greenhouse of an outstanding, experienced farmer, Moti Levi. We sort 40 tons of peppers a day here, coming from seven farms. When sorting, we use a special computerized conveyor in preparation for shipments to Europe, Russia and the US.” 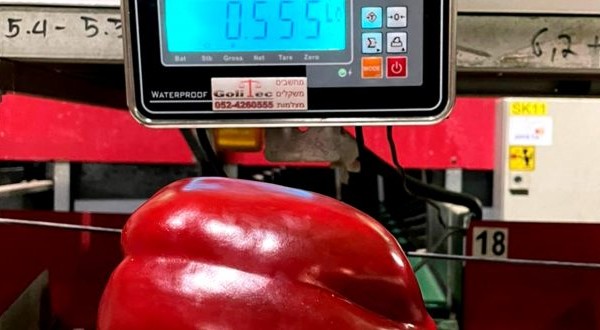 Shoham adds that the company strictly adheres to EU standards. “Our computer alerted that one pepper had an abnormal weight and size, so it couldn’t even pass the sorting system. We immediately checked it and weighed it again. We were amazed by its weight: over half a kilogram! It must be a Guinness record,” says Shoham.

An average pepper weighs around 250 grams. The largest pepper previously weighted was found in 2013 in Ein Yahav, with a weight of half a kilogram. But now this has been beaten by Moti Levi’s pepper that weighs even more.

The peppers from the Arava are considered top-quality because of the optimal climate conditions in which they are grown. The vegetables are grown in greenhouses, net houses, or tunnels. The irrigation water comes from a local pump and has a relatively high salinity level, which contributes to the quality and taste of the vegetables.

The vegetable system in the Arava is mainly during the winter months, when no vegetables are grown in other countries. Helped by lots of research, farmers in the middle and northern parts of the Arava have learned to take advantage of their location in the desert, with its many light hours and high temperatures. This way they are able to grow vegetables in winter. And as one Arava farmer advises: red peppers contain more vitamin C than oranges!