The grape markets in 2020/21 have been disrupted by many factors including the lockdowns in various markets and climatic issues in producing countries. This makes it very difficult for manufacturers of packaging to predict demand and they have to be ready to go into production should the situation change.

“We have been supplying clamshell punnets to the grape exporters in India, Brazil, Egypt for the past 7 years,” explains Sukhdeep Sethi, Director of AVI Global Plast. “Due to the move in the UK from clamshells to heat seal punnets, we took up the development of heat seal punnets four years ago. Logistically, heat seal punnets are packed by exporters in India, without sealing and exported to the UK where these are sealed by the importers/ distributors on high speed sealing machines. The sealing moulds on these machines were developed to seal certain pre-approved European punnets. Typically, trays are used to make sealing moulds but we had to reverse engineer this process which took us a year and several changes and working with the sealing machine manufacturers to get it right.” 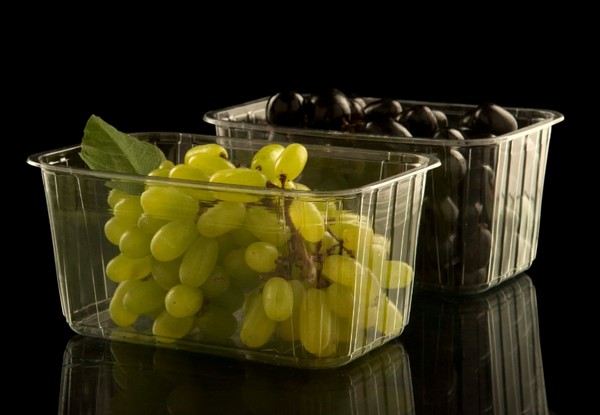 AVI Global’s heat seal punnets are now approved by major importers in the UK and Western Europe and the company has been consistently supplying these to Indian and Brazilian grape exporters for the past 3 years.

Until last year the bulk of the exports to Western Europe and other Non-UK destinations were still in clamshells and not heat seal punnets.

“Accordingly, we had started building up pre-season stocks of only clamshells. We are presently the only approved Indian vendor of heat seal punnets so bulk for the requirements were still being catered to by imports.”

Due to the COVID situation, the start of this year’s grape season was very different from previous years. Typically, exporters used to start sourcing and packing in punnets by mid-December but this year due to the uncertainty over lockdowns in Europe, container availability, freight costs, health concern of workers in the packhouses, AVI Global didn’t get any firm schedules from the exporters even till mid of January.

“Our sales in January were less than half of the previous years. However, due to the rains in Chile resulting in drop of exports to Europe from there, the demand for Indian grapes suddenly jumped in first week of February.

“Exporters had not planned a lot of imports this year due to delay in shipments of all kinds during this year which had made it difficult for anyone to plan the exact time of receipt of such imports. Further, the demand drastically shifted from clamshells to heat seal punnets. Customer demand for heat seal punnet increased up to three times their forecasts to us. To cater to this situation, our team stepped up production of sheets and punnets to cater to the demand since there was no other alternative for the exporters in the absence of imports or other local suppliers. The past 1.5 months have been unprecedented for us in terms of changing production plans almost on a daily basis to handle all customers’ requirements. This has been appreciated by the exporters.”