Last month, in-person trade shows returned to our industry with Viva Fresh in Texas. This week, it was SEPC’s turn with their Southern Exposure show. After postponing the event from its usual February date, the Southeast Produce Council was able to successfully hold the event with both in-person and virtual components. Yesterday’s exhibition garnered many positive responses from the industry. 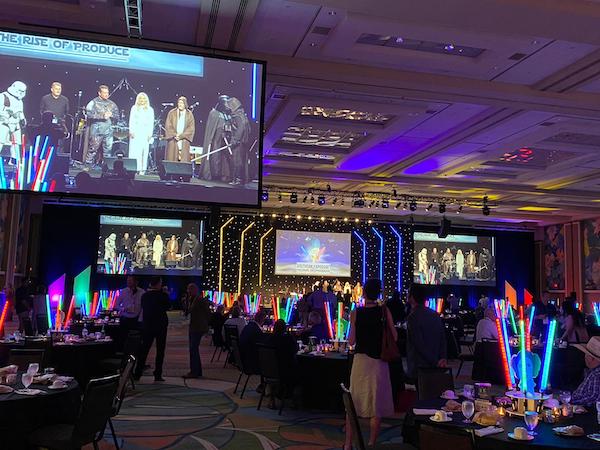 This year's event was Star Wars themed and titled "The Rise of Produce."

Happy to be back in person
After a year-long hiatus on any in-person contact, many people are happy to be able to slowly see the return of in-person events. “So much of retail business is built on relationships and being able to see each other in-person is key,” says Angela Hernandez of Trinity Fruit. “Everybody was really happy to see each other, and while everyone was masked up, people are starting to feel more comfortable and safer especially with the vaccines coming out. Since we were apart for so long, it was really good to be back in person.” 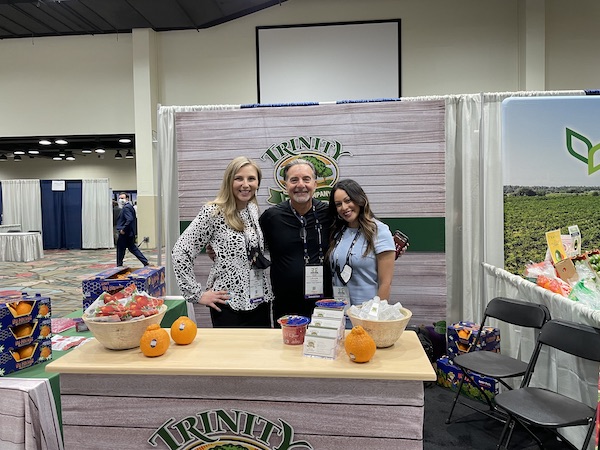 At the North Bay Produce booth, Sharon Robb displayed the company’s new top seal berries, along with their packaged snow peas, snap peas, and French green and yellow beans. “It was wonderful to connect with everyone after what felt like an eternity,” Robb says. Ricardo Roggiero of Freshway Produce adds: “The atmosphere was very positive, and everybody was looking to have a good conversation. It was great to be back at a trade show again.” 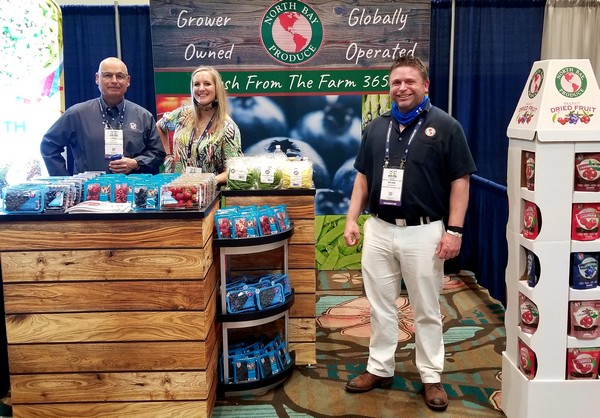 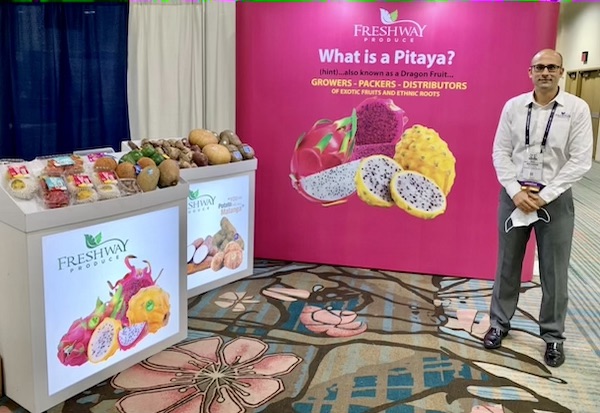 Ricardo Roggiero of Freshway Produce. The company's booth had a fresh new look and featured their dragon fruit as well as their other tropical offerings.

Jim Grabowski of Well Pict, who were at the show to highlight Well Pict’s proprietary strawberries out of Santa Maria, California, shares: “It was great to be back in person with friends and colleagues from the industry. For Well Pict, SEPC was the last in-person event we attended in 2020, so it was only fitting that SEPC was our first show for 2021.”

Traffic lower than usual, but good quality
Due to safety precautions, as well as people still being cautious with regard to travelling, the traffic at the show was lower than usual. Despite this, attendees were very satisfied with the turnout and the quality of the conversations held. “The attendance by retailers was lower this year, due to Covid,” says Grabowski. “However, the quality of conversations and interactions we had with the retailers present definitely made the show worthwhile to attend,” he adds. “Even though we didn’t see everyone at the show like in past years, we were able to spend a long time with the in-person attendees at our booth,” Robb agrees. 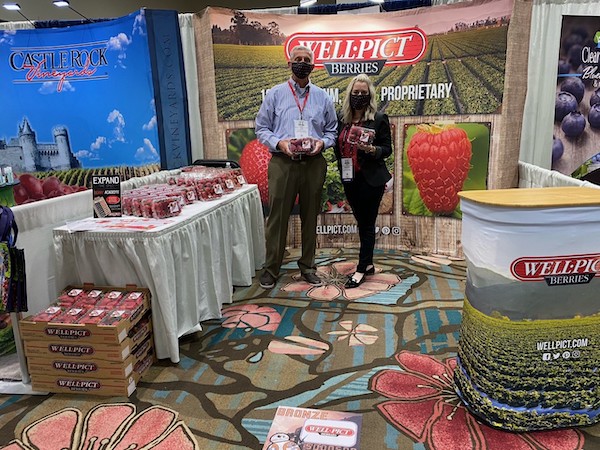 Jim Grabowski of Well Pict and Johnna Johnson of Marketing Plus.

Freshway Produce saw good traffic during the first half of the show, Roggiero says. “After the first three hours, it started to go down, but while there was a limited number of people, the quality of the conversations was there,” he shares. Hernandez agrees, adding: “The majority of visitors we saw were suppliers, but for it being a show that was both virtual as well as in person, in addition to the safety precautions limiting the visitors, I’d say the overall numbers were good.”

Besides being able to finally see each other in person again, companies were also excited to show off their new products. “We showcased our new dried fruit line at the Bright Ideas Fresh Arrivals showcase,” says Robb, adding: “We also sampled our gluten free breakfast cookies which feature blueberries and cherries from our new dried fruit line.” Trinity Fruit was also glad to show off their new Big Honey Dekopon citrus, alongside their traditional dried and fresh pomegranate arils.

“We truly feel that overall it was a successful event. The fact that SEPC was able to put together a hybrid event, with a good number of attendees, speaks highly of the quality and presentation of the show,” Roggiero concludes. North Bay's Robb agrees: “SEPC always does a top-notch job with their trade show experience and this show did not disappoint. We are proud to be silver sponsors of the show and really felt they went above and beyond to make all attendees feel comfortable.”