'Spanish oranges formed the basis of the offers'

The basis of the supply was formed by Spanish blond oranges and, above all, Lane Late and Navelate. From Egypt came mainly Valencia Late, which were purchased primarily for juice production. Turkish Washington Navel disappeared from the stores selectively. Italian products, Moro and Tarocco, predominated in blood oranges. Spanish fruits had a complementary character, especially Sanguinelli could be accessed. Even if the total number of deliveries was limited, the demand could be satisfied without any problems.

Demand was not particularly strong; spring-like temperatures as well as the shifted customer focus on seasonal fruit reduced the accommodation possibilities. However, as availability was also limited in parallel, quotations often remained at previous levels. In Cologne, they went up for the entire range. 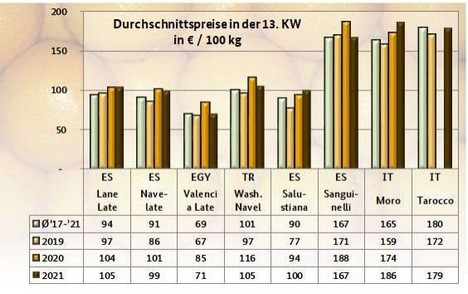 Apples
Domestic batches obviously predominated, Italian ones followed in terms of importance. The quality of the European products was generally convincing, which is why sales proceeded in an unagitated manner.

Pears
South African batches dominated events: Besides Williams Christ, which turned out to be too small on various occasions, and Rosemarie, there was primarily Cheeky. Abate Fetel supplemented the scene, Flamingo appeared only locally.

Table grapes
Overall, sales were quite quiet. Although availability was limited, merchants sometimes had to lower their prices to speed up sales.

Strawberries
Spring-like weather as well as Easter stimulated interest, which gradually improved. The assortment was led by Spanish goods, but their quality was quite inconsistent and therefore a wide range of prices was established.

Lemons
Demand was quite good; in some places it could only just be satisfied. Spain now provided Verna in addition to the established Primofiori. Turkish Enterdonato gradually disappeared from the range.

Bananas
As a rule, ripeners coordinated supply with demand, so not much happened in terms of prices.

Cauliflower
Italian deliveries dominated ahead of French deliveries. Overall availability had become limited and was not always sufficient to meet demand. At that point, prices climbed, in some cases quite rapidly.

Lettuce
The presence of Spanish iceberg lettuce apparently narrowed. Demand could not be met across the board. The prices tended to go up, up to €13 per 10-pack.

Cucumbers
Dutch, domestic and Belgian cucumbers shared the market. The supply was sufficient to meet demand. Prices sometimes dropped, because demand was a little too weak.

Tomatoes
A wide range of supply was available. TOV, very popular with buyers, often increased in price: they mainly came from the Netherlands, Spain, Turkey and Italy.

Sweet peppers
As in the previous week, it was not possible to fully cover demand. Spanish shipments dropped off steadily, while Dutch and Belgian shipments increased across the board. Starting from a high level, prices rose once again.