BioGold North America is a part of the BioGold International family of companies, which has footprints in Australia, Spain, the Mediterranean Basin, South Africa, South America and the United States. BioGold’s mission is to serve the citrus industry by improving grower portfolios by providing growers with access to varieties discovered and bred around the world. BioGold strives to maximize returns to breeders, growers and marketers through its variety improvement efforts. Two of the latest examples of these efforts are the BioGold Kirkwood Red Navel and the BioGold Ruby Seedless Valencia, both patented varieties (US PP24,778 P3 and US PP31,794 P2 respectively).

Kirkwood Red Navel
The BioGold Kirkwood Red Navel, a natural variant of a Palmer Navel in South Africa, is a red-fleshed navel orange. Throughout the season, this variety has higher acids than the Cara Cara navel and firmer fruit. These features allow the fruit to hang on the tree for up to four weeks later than the traditional Cara Cara, extending the red-navel season with good quality. 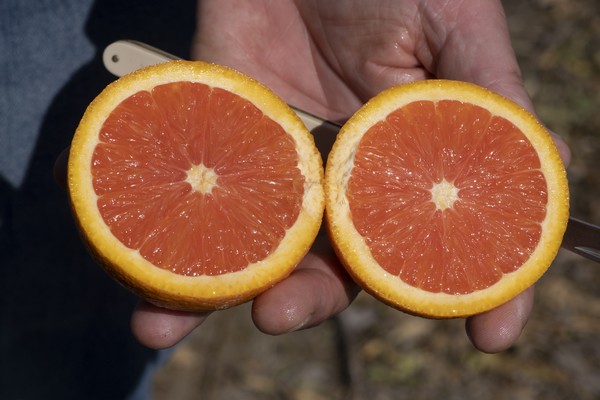 Ruby Seedless Valencia
The BioGold Ruby Seedless Valencia, a seedless variant of BioGold’s Ruby Valencia, is a red-fleshed Valencia that matures from May to August in California. This fruit is naturally seedless. Together, these varieties should allow marketers to extend the red-flesh orange season from mid-December through August with the conventional Cara Cara, followed by Kirkwood Red and the Ruby Valencia. BioGold is also in the process of evaluating early red navel selections as well as some additional late season navels and red Valencia types.

The worldwide increase in popularity of pigmented citrus varieties is not only due to their attractive color and visual differentiation, but also the high Brix and sweet flavor that these varieties are known to exhibit. In a 2016 study titled Using Single Colors and Color Pairs to Communicate Basic Tastes, Spence et al establishes that consumers reliably associate the color red with sweetness. This association suggests that pigmented citrus will continue to gain popularity among consumers.