As long as the weather conditions remain favorable, an abundant cherry harvest is expected

The weather conditions have so far remained favorable in the main cherry producing areas, with the exception of some frosts in a few given areas. In Tarragona, the first cherries are expected to reach the market around April 20, and as long as no adverse weather events are recorded, there should be an abundant harvest. 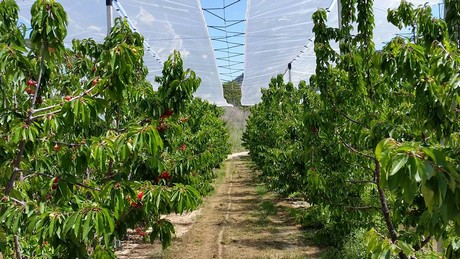 "So far, the weather has generally been good during the winter, with enough hours of cold, also during the flowering and fruit set period," says David Manero, partner of the cherry producer and marketer Cerima Cherries, from Tarragona. "It is true, however, that the frost of March 21 took a toll on some of the lowest farms near the Ebro River, where temperatures dropped to -3º. Consequently, our production will be at least 10% lower than what we had expected his year," he says.

Over the last few days, temperatures have been optimal and the earliest fruit is expected to turn a reddish color in about 10 days. "From then on it will be crucial that it doesn't rain too much, because that's when quality problems due to excess moisture can occur," says the grower.

Despite the impact of frosts on some of its farms, Cerima Cherries expects its production to increase compared to last year. With around 450 hectares of its own production, the company will reach 5 million kilos in the next two years. Moreover, they are carrying out a major varietal renewal.

"We are replacing obsolete varieties with new generation ones with a longer shelf life, taste quality levels that adapt to new demands and more firmness to be able to export to distant markets. One of our priorities is to be able to open new markets, taking into account that we are growing in terms of volume," says David Manero.

"In Europe, we export mainly to large retail chains in Germany, the Netherlands, Italy, the United Kingdom and, increasingly, Spain. The UK has been one of our main markets since Cerima Cherries was founded. We've had many concerns due the Brexit over the last 5 years, but for the time being, it seems that we will be able to keep exporting to this country without many problems, since the entry into force of the phytosanitary passport has been postponed to January 1, 2022. We are also shipping more to the Middle and Far East. We continue working in the opening of the Chinese market, although that now depends on the negotiations carried out by the Spanish public administration."

It is worth recalling that the 2020 cherry campaign started only a few weeks after the State of Alarm was declared in Spain and in most European countries due to the coronavirus pandemic. "This year, fortunately, we are not dealing with as much uncertainty. We expect a better campaign in that sense, because we are prepared for everything, both in the field and in the warehouse, as well as at a logistical level, so shipments to the most distant destinations won't be as affected."