USDA has announced a new import requirement for Chilean stone fruit after the European Grapevine Moth (EGVM) was detected during a pre-inspection in February. Cristian Ramila of Bengard Marketing explains: “Chilean stone fruit that enters the US undergoes a pre-inspection in Chile before it is shipped, and it was during one of these inspections that the EGVM was found. In early March, USDA decided to halt the pre-inspections altogether until they made a decision on how to proceed. Last week they finally reached their decision and announced that the Chilean plums will have to be fumigated before they enter the US.” 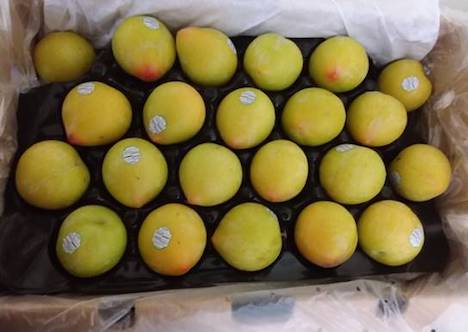 Announcement comes at end of stone fruit season
The USDA announcement won’t have much of an impact anymore for this season, says Ramila. “We are one of the last importers to still be receiving shipments of plums for the season and our last shipment will arrive in a few days,” he says. “Realistically, the season was already cut short in March when they stopped their pre-inspections. After that decision, only fruit that was already inspected was able to ship. That means that fruit that was already on the water or fruit that had been inspected and put into cold storage afterward, those were the only volumes that were still being shipped into the US. These shipments had to undergo another, additional inspection when they arrived in the US,” he shares.

While the overall volumes arriving now are lower than they usually are for this time of the year, the winding down of shipments isn’t unusual for mid-to-end of April. “Fruit that is shipped now won’t arrive in the US until the end of April. Early May is when California stone fruit starts to come in, so the Chilean imports usually try not to overlap with the domestic season. So, the season wrapping up now isn’t out of the norm, this is when it usually ends,” Ramila says.

Stone fruit market continues to be stable
While the season was cut short in March when the pre-inspections were halted, the US market has remained stable. Ramila says: “The overall Plum volumes of this season were higher than usual, so while the total volumes were reduced, the market had enough supply and there were no shortages. In a week or two we might see a little bit of shortages, but that remains to be seen.”

So, for the current Chilean stone fruit season, the recent USDA announcement that they will require the fruit to be fumigated prior to shipping won’t have any effect. For next season, however, it could be a major issue. “We don’t know yet if the rule will apply to next season. Many plum varieties won’t be able to survive the fumigation process, so we hope that this rule won’t apply to next season and that they find another way of approaching this issue; if not, the future plum volumes will be significantly reduced,” Ramila concludes.