On Tuesday Moody's withdrew all ratings from the Land Bank, a day before the deadline on which the Land Bank was supposed to have come up with a debt restructuring plan to deal with R50 billion (2.89 billion euros) in defaulted debt to the South African Reserve Bank.

“Moody’s didn’t offer an exact reason for why it has withdrawn the credit rating of the Land Bank,” Ray Mahlaka in the Daily Maverick. “[It] is important for SA’s food security system because it provides 28% of SA’s agricultural debt to emerging and established farmers.”

Just last month the Land Bank had received a R7 billion (405 million euros) government bailout, to supplement the R3billion (173 million euros) bailout of last year after defaulting on its debt a year ago.

Reuters reported the head of credit at an asset management that is one of the Land Bank's creditors as saying “the degradation can be quick” at the financial institution.

The Industrial Development Corporation has stepped in with a R1 billion (almost 58 million euros) fund for small-scale small farmers, the Department of Agriculture, Land Reform and Rural Development announced a few weeks ago.

On the Land Bank's website it still calls itself “a true South African development finance institution that serves all farmers equally”. 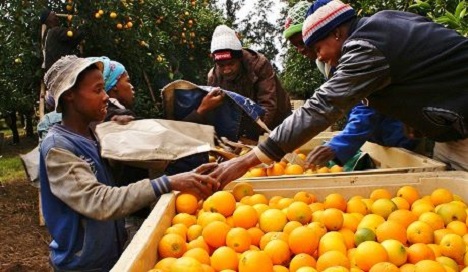 The Motsepe Foundation earlier last month released a statement that despite numerous meetings over the past eighteen months with kings, queens, traditional leaders and other rural and urban stakeholders the agriculture and land reform sustainable development partnership programme between itself, AgriSA and traditional leaders has experienced challenges relating to the acquisition and provision of title deeds and other land security.

"[This was] making it onerous and difficult for banking and other financial institutions to partner, co-fund or provide finance to agriculture and land reform projects in partnership with the Motsepe Foundation, the Traditional Communities Partnership and Agri SA," it continues.

The Motsepe Foundation as well as "the kings, queens, traditional leaders and their communities and Agri SA are on a steep learning curve but remain committed to making a humble contribution to the agriculture and land reform process in South Africa".

Access to capital is the single biggest issue raised in discussions on the economic participation of black farmers.

In the Eastern Cape there are farmers who have been growing citrus for 25 years on the same farm, and they are still, despite years of trying to get the process through the Deeds Office, not the owners of their own farms. This means no surety on which to raise capital, and there are partnerships between packhouses and exporters with black citrus growers, underwriting their operations.

It will now probably become even more onerous for black farmers to raise capital with the state-owned Land Bank.