US: Blueberry crop may see effects of cold and wet weather

Mississippi’s recent bout of bad weather came at a critical time for producers of blueberries, the state’s largest commercial fruit crop. Blueberries can be easily damaged by cold weather, but the timing of mid-February’s icy weather limited the potential damage.

“Fortunately, most blueberry flower buds were still tight, which reduced damage,” said Eric Stafne, fruit and nut specialist with the Mississippi State University Extension Service. “This was especially true of rabbiteye varieties, which is the most common type grown in Mississippi. Some early southern highbush varieties had open or exposed flowers and were damaged by the cold.” 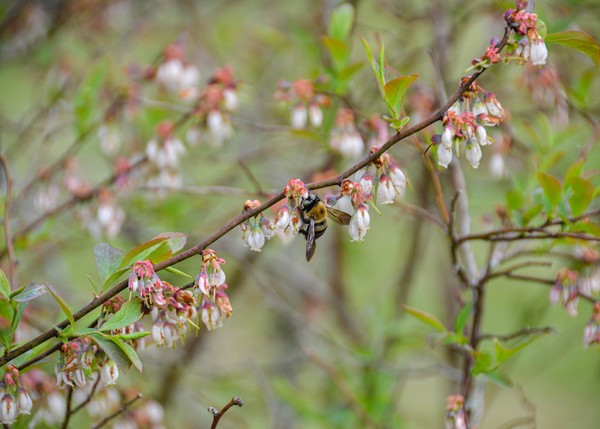 Cold damage, which can be difficult to mitigate in blueberry crops, can reduce yield and berry size. Rabbiteye blueberries with their tightly closed buds can withstand temperatures as low as 21 degrees. However, open or partially open buds are damaged at temperatures between 25 and 29 degrees.

“Most blueberries are grown in south Mississippi, so temperatures were not quite as low as in other areas of the state, and we don’t grow a lot of the southern highbush varieties, so the overall impact from the cold event was minor,” Stafne said. “However, if it had been a week later, we would have had more trouble.”

Pollen
The arrival of spring storms and heavy rains may put a damper on pollination and increase the potential for disease onset.

“During periods of rain, bees don’t fly as much and don’t move pollen,” Stafne said. “And wet pollen is more difficult to transport. Rain also can help usher in diseases, such as Botrytis, that can affect the blueberry blooms. This is especially true if the blooms have been injured by cold.”

Mississippi’s blueberry industry is holding steady with a shift to favor local and regional fresh markets rather than national and global frozen markets.

“Several years ago, it was easier for our co-ops to enter the frozen market,” Stafne said. “However, consumer demand has changed, and other places have flooded the frozen market with those in-demand varieties that we don’t grow a lot of. Other factors also influenced this shift, including government regulations, availability of labor, aging out of growers and other things.”

While growing commercial blueberries for a global or national market is tough right now, Stafne said people who want to grow berries for the local fresh market have a lot of opportunity.

Part of the reason for that opportunity is the popularity of blueberries and their reputation as a nutritional powerhouse. Blueberries are high in antioxidants, fiber, and vitamins and minerals, including Vitamin C, potassium and folate.

“Adding more fruit to your diet will increase your fiber intake and can help reduce the risk of chronic health conditions, such as heart disease,” said Qula Madkin, Extension nutrition educator and registered dietitian. “Blueberries are often associated with desserts, but they are very versatile. Try them in salads, paired with yogurt or cheese and frozen for a quick, cool summer treat.”