Dutch cucumbers dominated the market. In terms of importance, German and Belgian batches came after these .Greek imports were available in sparse quantities, exclusively in Berlin. In general, the availability of large caliber cucumbers was rather low, which had a varying effect on prices, which increased selectively. On the other hand, demand was so weak that traders had to lower their prices in order to improve sales.

Domestic lots were the least affected by the price reductions and in some places became more expensive. Dutch and German deliveries predominated when it came to mini cucumbers. Turkish and Spanish shipments were at most of a supplementary nature. Business was unexciting and prices mostly remained at their previous levels. In Hamburg, the supply was somewhat too much, so prices trended downward. 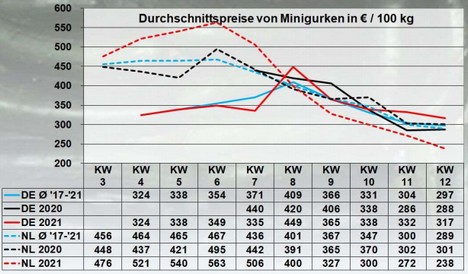 Apples
Domestic good still dominated here, with Elstar and Jonagold forming the basis of the range. Pinova and Kanzi lost relevance and the presence of Holsteiner Cox also dwindled.

Pears
South African imports expanded. The quality of the products from the southern hemisphere was generally good, so that customer demand was mostly steady. At times, however, buyers were still more interested in the European products, whose organoleptic properties remained quite good.

Table grapes
South African fruit dominated here. For the most part, prices did not change significantly, as supply was in sync with demand.

Strawberries
Deliveries from Spain dominated events. Especially at the beginning of the week, their availability was very extensive. Only towards the weekend did sales improve.

Bananas
In most cases, the supply had been sufficiently adapted to the sales. Demand was not particularly strong, only intensifying on various occasions, more so towards the weekend.

Cauliflower
Prices went up, in some cases quite strongly. The reasons were a limited availability and a nice demand. French batches rose rapidly in price.

Lettuce
For the most part, prices dropped slightly. Iceberg lettuce was available exclusively from Spain. Availability had expanded a bit. Demand was satisfied without much effort.

Tomatoes
A wide assortment was available. Prices mostly went up, sometimes quite significantly.

Sweet peppers
The markets unanimously reported strongly rising prices, which in some cases only stopped at a maximum of € 30 per 5-kg package. However, only the yellow and red offers did see these strong increases in price.

Asparagus
Business picked up slowly, although more intense demand is expected in the week before Easter. Deliveries from Germany increased.