"NZ has a very good name as a market leader and agriculture innovator, so they will give companies the time and listen"

An international consulting company says New Zealand has a real opportunity to be a partner of choice with the Middle East in providing "world-leading agritech solutions" to a growing agriculture sector.

Alpha Kennedy, from Prime Consulting International, told delegates at the MobileTECH Ag event in Rotorua that the United Arab Emirates and Gulf Countries are just about to begin major expansion, especially in horticulture.

"Whether it's precision agriculture, remote sensors, irrigation systems, soil regeneration and fertility, farm management, software training, robotic harvesting, pricing information or market access applications," Mr Kennedy said. "If you have a product that fits into those focus areas there is a place for you to (partner) a customer who is willing to listen, and willing to pay. The UAE and the wider Gulf Cooperation Council (GCC) areas have a very distinct set of challenges, such as the higher cost of food imports, the high cost of production, environmental barriers, skilled workers - they all require technological solutions to overcome them. But this opportunity will not be around forever. New Zealand has a very good name as a market leader and agriculture innovator, so they will give NZ companies the time and listen, but ultimately they are moving forward quickly and will go with those who are there. There are Dutch, Irish or Israeli companies, for example, that are also keenly aware of opportunities." 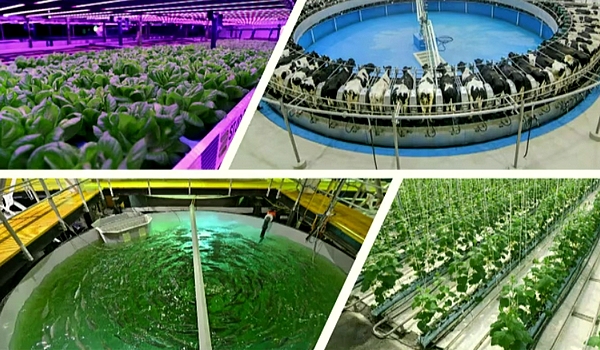 Photo: some of the agritech projects underway in UAE, including vertical farming and vegetable production. Source: Alpha Kennedy's presentation at MobileTECH Ag.

"It is a crucial gateway for New Zealand goods and services to Africa, the rest of the Middle East and parts of Europe," he said. "The UAE and its neighbour Saudi Arabia are two of our fastest-growing export markets. The paradox in the UAE is that just two kilometres away (from Dubai's busy city centre) lies desert land that flows into rocky mountains and then more desert beyond. So, while the people will need more of our fruits and other food, they hunger for smarts to sustainably feed themselves and the populations around them. That's the challenge, but it also provides an enormous opportunity for New Zealand - we are highly respected for our agritech."

Mr Kennedy adds that the United Arab Emirates' agriculture industry is worth more than US$3billion annually and growing by 4 per cent overall, and the horticulture sector is growing by 6 per cent. In 2019, horticulture produced 1.25million tonnes of field crops, fruit and vegetables, mostly in the country's north, while vertical farms are being created in Dubai, Abu Dhabi and Sharjah.

"There are a number of 'pain-points' driving the (growth) intensification; firstly, it is hard to grow food in the UAE," he said. "It's not impossibly hard, but very hard. Summer can be above 50 degrees celsius, and winter can be balmy in the 20s. There is also very little rainfall and the country is dependent on desalinisation, which is expensive to produce and of the water that is produced, 66 per cent is used for agriculture purposes. The cost of water is also subsidised and the government is looking to end those subsidies in coming years. This means that they are constantly on the lookout for tech and emerging technologies that can address these challenges."

As a result, the UAE currently imports around 90 per cent of its food. Mr Kennedy says this figure has been increasing, as has the dollar cost of importing, and with the country's population set to increase to 15 million over the next 20 years, it is imperative to increase domestic production for food security and quality of life.

"They have set some very ambitious targets and they are aiming to be the most food-secure nation by 2050," he said. "That will require a mix of domestic production, trade agreements and the like. But these pain points are not just being experienced in the UAE but are widely experienced across the Gulf states and they all have transformation plans in place to improve food security. So, the opportunities are not just in the UAE but much broader and agriculture in the GCC is already valued at $20billion. For (NZ) companies with products, solutions and developments, I encourage you to take advantage of these technology incubators, accelerators and financing programs. There is a range of financial support available."

He says the future of agritech is already taking place with vertical farms coming into production in the past 18 months, and in 2020 Abu Dhabi invested US$200million in vertical farms.

Mr McKenna is encouraging interested companies and agencies to attend and make connections at the World Expo in Dubai, which was postponed from last year, and will run for six months from October 2021.

"We have designed a discover agritech program for exporters working across all aspects of the sector," he said. "The programme is going to include online learning, webinars, advisor meetings in New Zealand. Followed by a week here to look at what is going on. We are going to have project visits, we are going to meet with government departments, advisors and partners, we will look at some of the accelerators and a specialised visit to the Agra Middle East trade show."