As fruits and vegetables are among the most perishable agricultural produce, Indian post-harvest losses reportedly result in billions of losses per year. These loss primarily occur due to lack of proper facilities for storage and transportation. Some estimates put wastage at around 52% even before the produce reaches consumers.

A research team headed by Dr. Jagadis Gupta Kapuganti from the New Delhi based National Institute of Plant Genome Research (NIPGR) has claimed to have developed a safe, user-friendly, and cost-effective technology to considerably delay the ripening process of fruits and vegetables.

Fruits like banana, mango, custard apple (sharifa), sapodilla (chikoo), fig, et cetera will ripen quickly and they bruise easily. After harvesting, it is difficult to store them for transport and delivery to the market. But the indigenously developed prototype has already been successful in enhancing shelf life of produce. 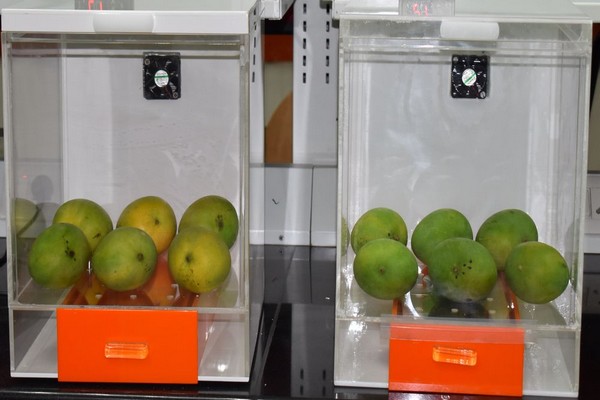 Mangoes on the right, treated with the formula, retained texture unlike those on left which ripened earlier / Image: Krishi.outlookindia.com

“As the fruit or vegetable ripen more, it becomes softer and more easily bruised and susceptible to disease or other spoilage causing agents,” Dr. Kapuganti told krishi.outlookindia.com.

Ethylene, a gaseous plant hormone, is the key signal compound involved in the regulation of the ripening process in fruits at all its stages. Climacteric fruits -those that can ripen after being picked- produce much more ethylene. Some fruits, like mangoes and bananas, produce more ethylene gas than other climacteric fruits.

Thus, the ripening process can be regulated by regulating ethylene. Here, participation of Nitric Oxide emerged as an important signal in plants in recent years.

The team then developed a prototype comprising two chambers. A smaller chamber for housing the formula inducing Nitrous Oxide from edible leaves, and a larger chamber for the produce to be treated.