Belgapom's secretary-general, Romain Cools, is bidding farewell to the Belgian potato sector. His career spans 30 years. "It's been 30 years full of highlights," says Romain. "I started in 1991. Back then, my knowledge of the chain was minimal. And the sector looked very different. Each major Belgian city had its own local potato trade organization. Today, the country's potato trade and processing sectors only have Belgapom," Romain begins.

"The processing industry wasn't yet as large and important as it is today. In the past 30 years, the entire chain's professionalized tremendously. That's from growers to packers and traders to the industry. Now, 80 to 90% of growers are Vegaplan certified. The transition from CIPC to alternative, organic sprout inhibitors has gone smoothly. That's thanks to the level of professionalization the sector's reached."

"Belpotato.be, a recognized sector organization, was also recently launched. That's something I am enormously proud of too. The potato sector in Belgium has grown from a small one to a leading global player. That's not only through potato products exports. It's also in the field of innovation and research throughout the chain," Romain continues. 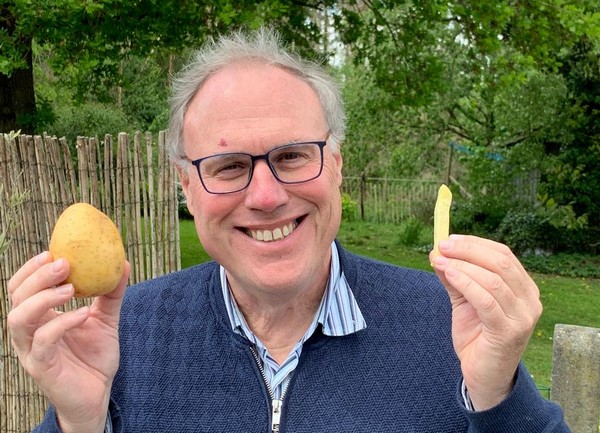 Romain was secretary-general of Europatat and EUPPA, both for European Potato Trade. That was for 15 and seven years respectively. That contributed to both organizations now having their place in Brussels. He says that's an example of the sector's thorough professionalization. "The European Union is now aware of the European potato chain. That was different in the past."

Interpom
“Of course, I can't omit Interpom. We've been organizing this event in Kortrijk for years. That's the European potato region's center. Throughout that time, we've succeeded in developing this trade show into a true potato chain event. Everyone focused on developing and concentrating agricultural fairs."

"But Belgapom wanted to involve the entire chain, from 'farm to fork', in this initiative. And they succeeded. This event is set to take place at the end of November. That's if they get permission to continue, of course. I'm sure it will boost this great sector anew. It's been struggling recently because of the pandemic," says Cools.

Besides his work with Belgapom, Romain was also president/CEO of the Canadian NGO World Potato Congress (WPC). "It was a great experience. I still get goosebumps when I think of chairing the congress in Peru. All the more so because we got the chance to visit the wonderful project being run in cooperation with the NGO Trias."

"It allowed a potato cooperative in the Peruvian Andes to successfully set up a special production line for the first time. This was for the traditional industrial production of chuños or freeze-dried potatoes. That was done with the support of various partners from Flanders. Only then do you realize how important potatoes are. That's for so many people all over the world's livelihood," explains Romain.

World congress
Romain is slowly winding down his duties at Belgapom. He will, however, only conclude his career after the World Congress in Dublin. "The congress was supposed to take place this year. But the pandemic has thrown a spanner in the works. We're working on very nice promotions."

"We can, however, only present to the world next year. I'm very grateful for the wonderful opportunities I've been given." Romain points out that as chairman, he's proud to have succeeded in rejuvenating, feminizing, and internationalizing both the board and its international advisors. "WPC inc is ready for the future."

"I'm thankful for wonderful partnerships. That's when I reflect on my work in the Belgian and European potato chains. But I'm also glad of the tough discussions, I've had the privilege of having those with many people from the sector. Yet, it wasn't always just good times. Every year, something happened," adds Romain.

"In the 1990s, a large part of the Dutch harvest was flooded. Then it was dry weather, then wet weather. Guy Van den Broeke, a former Belgapom chairman, once told me, 'There's something every year in the potato sector. But there's one great thing. In September, it can make a fresh start and forget all the past year's worries'."

Challenges
Christophe Vermeulen has replaced Romain as Belgapom's head. "He's a great successor, in whom I have every confidence. He has some political experience, which will stand him in good stead. There are big challenges ahead. These include the Green Deal (with the farm to fork strategy) and increasing protectionism. Growers are also suspicious about research outcomes and the resulting innovation. The agricultural sector is by definition quite conservative. Just consider the increasing scrapping of chemical pesticides. I understand very well that growers are unhappy with this," says Cools.

"But, it's something that the sector has to deal with. We simply can't put a product on the market of which consumers are doubtful. During my career, I've always worked closely with science and innovative research. These can provide real answers to the many challenges we face. Everything indicates that a new agriculture and food industry is about to start. This seemed like a good time to hand over the federation's leadership to a new generation. The same generation that's taken over our companies."

Studies
Those who fear that Romain will become bored during his retirement are sorely mistaken. "I'm going to study again," he laughs. "Modern history. I've been interested in the connections between the past, the present, and the future from a young age. I'll also be busy visiting friends all over the world. I've had too little time for that in the past, And, naturally, I'll spend more time with my family."

"I want to truly disconnect from the industry. I've been mentally preparing for that for a while now. Some people don't believe I'll succeed. They say that I'm (too) fond of potatoes. I am but as a home chef now. I'm going to focus more on potatoes' culinary aspects. And less on their monetary aspect. I'm not afraid to fall into that black hole that many warn me about either."

Proud potato
“After all these years, I will, undoubtedly, miss the sector and its people. I'm already experiencing that now because of the COVID-19 pandemic. I have one more tip that I'd like to pass on to everyone in the sector," Cools says. "In England, and here too, they always talk about the 'humble' potato. And we as a sector remain humble. But we can surely be a lot prouder of our sector. Potatoes aren't only great, healthy products. They're also ideal meal fillers that complement all other products on the plate."

"You can enjoy them as delicious fries with a little mayonnaise (sweet or salty is an aside) too. What's more, they bring prosperity and well-being to thousands of families. Maybe we should stop talking about the 'humble' potato and start talking about the 'proud' potato. Because it's a wonderful product. I'm extremely proud and grateful that I could help build potatoes' fantastic story. That was not only in Belgium but in Europe and the world," concludes Romain.