"Squeezing everything out of blueberries." That's abbGrowers, in the Netherlands, credo. Fred Douven, therefore, stubbornly disregards requests to offer a broader soft fruit package. "Blueberries still offer a huge amount of potential. The market is growing by 15 to 18% annually. It's now the seventh-most purchased fruit variety in supermarkets. More people are eating more blueberries throughout the day. Retailers are responding well to this. They're increasing the choice of packaging and offering frozen blueberries. And, most importantly, they're selling blueberry juice."

This company's been juicing and bottling its own berries for 15 years already. Now, Guus Coppus has joined abbGrowers as their Prepare Sales Manager. That's after a 40-year career at Lutèce/Greenyard. After a year of fresh blueberry sales, he'll be focusing entirely on the juice business. "I'm very enthusiastic about the product. We produce according to traditional methods, and no nutrients are lost. The juice is 100% pure, with no additives. For example, a 750 ml bottle of juice contains 1kg of fresh blueberries. A 200ml bottle, 270g." 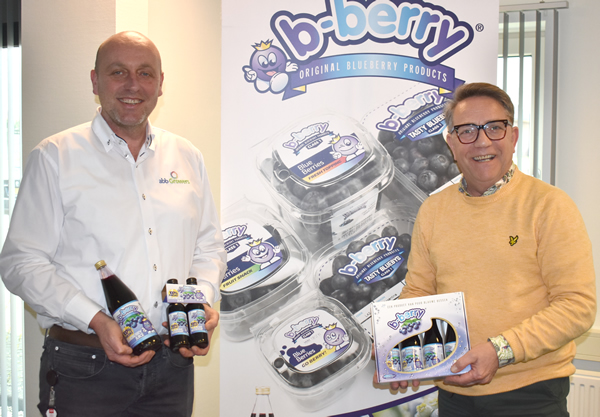 Premium line
"With the juices, we're focusing on regional, farm, and specialty stores, bakeries, and small retailers for now. What's new is that we'll soon be introducing a new premium line of B-Berry juice. This juice's secret lies in the top varieties selected for it. These give it a fantastic flavor and color."

"We hope to introduce these to restaurants. They're great for teetotallers or as something similar to alcohol-free wine," says Guus. "Both the premium and standard labels are available in Dutch, English, or multilingual. And the standard bottles are available with private labels too," explains Guus.

The fresh blueberry season is currently facing challenges. "Morocco's production is lagging considerably. And many farmers aren't getting the harvest done. The cold spring also set Spanish production back by at least three weeks. Added to that, Chile was off the market three weeks earlier than usual. That was due to heavy rainfall. That's the gist of the current market situation," says managing director Fred Douven.

Up to 1kg packaging
According to him, prices are, however, not skyrocketing. "The berry market hasn't let that happen in recent years. In the past, in a tight market, they sometimes went for €12-13/kg. But those days are over. Blueberries are no longer a niche product. They've become a primary item on fruit and vegetable shelves."

"You often saw a single kind of packing. Nowadays, there are mostly two or three different packagings available. If there is a severe shortage, as there is now, retailers will revert to 125g packs. But 250 to 650g have become the new norm. That even goes up to 1kg packs these days."

Growers all over the world have planted many blueberry bushes in recent years. Despite this, Fred doesn't fear a saturation of the market. "I still see huge opportunities in markets where consumption is still exceptionally low. New varieties have also been rapidly developed in recent years. They've truly enormously improved shelf life, flavor, and firmness."

"For example, we're launching our Sekoya program in seven European countries. And also in African countries such as Morocco, Namibia, Zimbabwe, and South Africa. To reduce risks, we supplement it with Peruvian and Mexican supplies. Then we can provide our customers with uniformly high-quality blueberries all year-round."

Asparagus per container from Peru and Mexico
abbGrowers has been strong in asparagus for many years too. "From July onwards, we'll be switching completely to green asparagus from Peru. This year we're also having all asparagus arrive in bulk. That benefits our customers. That's because all the asparagus is rechecked here. And if necessary, dry ends are removed. The asparagus is then packed according to customer specifications," Fred continues.

Another new thing is that the company is receiving containers from Peru and Mexico. "I know many have tried this before and it often didn't work out. But we think, after four years of testing and preparation, we've found a successful answer. We'll be running a 17-week container asparagus program."

Fred sees much growth potential for this product too. "Currently, most green asparagus is packed per 450g, and the white per 500g. But I wonder if this meets consumer wishes. Supermarkets are increasingly moving towards personalized supplies. So, the question is whether you should offer only 500g options to a one-person household. We package the product on-site, so we give supermarkets choices. These could be loose, in a tray, or with a top seal."

"The correct information about how to use asparagus is also vital. You don't want to know how many people still store their asparagus out rather than in the fridge. This season, we're delivering a barbecue package to a Swiss retailer. It contains white and green asparagus and three types of bell peppers. We expect that to be very successful," concludes Fred.