This year marks the 30th anniversary of SHAFFE and has also been named by the UN as International Year of Fruit and Vegetables, so it is a perfect year to hold the first Southern Hemisphere Fresh Fruit Trade congress.

Ms Hajdu reflected on an exceptional year in the fresh produce industry with all the challenges including logistical problems and no face-to-face meeting at tradeshows, but as well as a year of challenges it has brought opportunities and we are now better and faster connected than ever.

SHAFFE also announced a new cooperation agreement with the
Chinese fruit importing industry. The congress witnessed the signing of a Memorandum of Understanding with the China Chamber of Commerce of Foodstuffs, Native Produce and Animal By-Products (CCCFNA). The Chinese market has become an important outlet for Southern Hemisphere Traders. The market has been growing 90% over the past five years to 2.5 billion USD market. 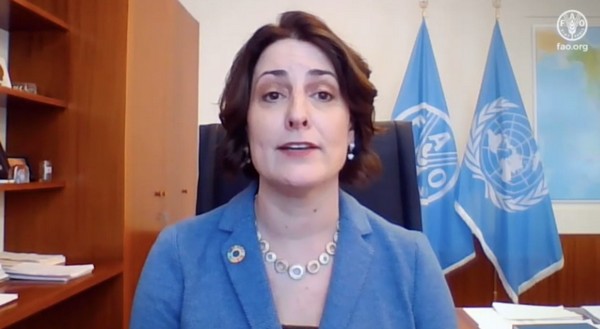 FAO Deputy Director General, Ms Beth Bechdol, spoke about the great income generating potential of the industry and about how important it is to look at it holistically. She also discussed the challenges faced during the pandemic and the importance of responsive systems and the need for resilience on domestic markets.

“The mail challenges faced during the pandemic have been distribution and production. Many exports are dependant on airfeight which is longer as available as it was pre-pandemic. There were also delays and closures at borders which slowed trade and led to produce going unsold. Now communities are facing increased unemployment leading to reduced incomes and poverty. The pandemic showed the importance of having responsive systems and a need for resilient domestic systems. Production has become more difficult and more expensive.”

The FAO has a new strategy to encourage more private sector involvement and it wants to engage with small and medium growers on this. 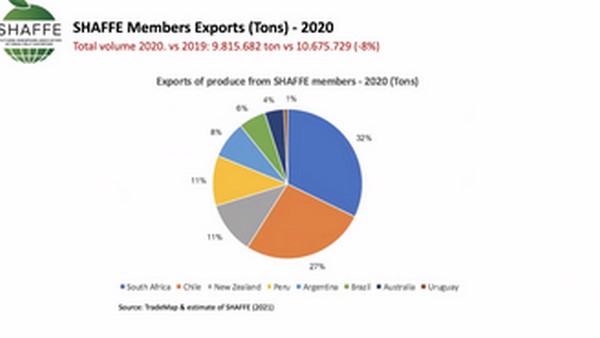 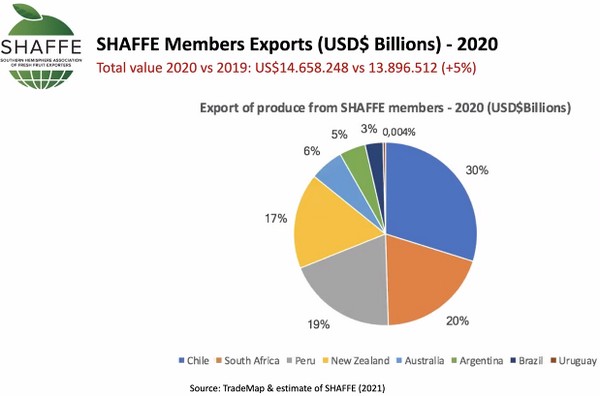 Of all the fruit exported by SHAFFE countries: grapes, kiwifruit, blueberries and apples alone make up 57% of the exports. When comparing export volumes over the last 5 years cherries have seen the biggest increase at +110% and blueberries come second at +72%.

Looking at where this fruit is sent it is no surprise that China has seen the biggest increase in imports over the last five years with an increase in 90% with a value of US$2.5 million. Japan has seen an increase of 52% and The Netherlands +28%. Hong Kong has seen a drop in its share of imports by 5%, this is likely due to more being shipped directly into China.

Challenges and strengths
Climate is the main challenge, with some countries facing prolonged drought while others have heavy rainfall. It no surprise to learn that labour is also a major challenge and has an impact on the harvest outcome. There is market expansion but gaining market access can be slow. There also needs to be more investment in new varieties.

Obviously COVID has been the major challenge in the past year. The pandemic has has varying impacts in the different countries, this said all countries continued to supply the markets.

In many countries the political situation and Government policies have a big influence on production and markets. Tariff barriers in certain markets can also prevent growth and lead to more produce going to low tariff countries.

Logistics is an ongoing challenge, with continued shipping restraints. There are also opportunities to build on individual strengths: Organics in Argentina, tropical fruit in Brazil, cherries in Chile, citrus in Uruguay, soil and new cultivars in the Andes region of Peru, food security in New Zealand, agro-food master plan in South Africa and diversification of plantings and premium citrus in Australia.

Member survey
The members of SHAFFE took part in a survey and were asked how they perceived certain aspect of the industry.

The health trend and ecommerce areas were seen as the major growth areas, while food service was ranked as the lowest area for future growth. This has most likely been impacted by the pandemic.

Unsurprisingly logistic delays and the pandemic were perceived as the major challenges. Domestic protectionism came a close third, with most countries promoting 'eat local' campaigns. Food safety seems to no longer be seen as a challenge but as a basic requirement.

Ending on a very positive note 80% of members see the next five years in the fruit industry as being good to excellent.