With responses from Hamburg Süd, MSC, HMM and Seatrade

The refloating of one of the largest container ships in the world in the Suez Canal could take days or even weeks, said the Boskalis CEO on the Dutch news-show ‘Nieuwsuur’ yesterday evening. A team from the Dutch dredging company arrived in Egypt on Thursday morning to help.

Attempts to move the huge container ship resumed at high tide on Thursday. The Evergreen vessel beached diagonally on Tuesday morning after going adrift in high winds, the Suez Canal Authority (SCA) said in a statement. 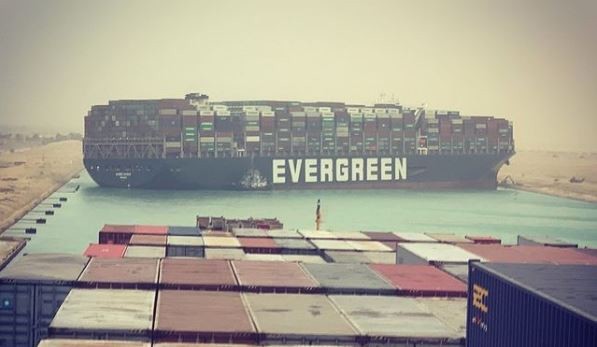 Hamburg Süd
Hamburg Süd is also taking the situation very seriously. "Every day about 50 ships pass through the canal, which are now trapped there. Seven ships from Maersk are also currently in the canal and are now awaiting new developments." As a result, no ships of the fleet are being diverted yet. "The route around the Cape of Good Hope can take seven to ten days longer than sailing through the canal."

The blockade also has consequences for the European fruit trade. "Loads of bananas from the Philippines and grapes from India, for example, have been hit," he said. However, he said it was too early to see if this would create bottlenecks.

There are two options for further action, said a company spokesperson: "Ideally, the vessel could be towed free. This may require specialized salvage vessels, which could take several more days. the containers would have to be unloaded from the ship, either by crane or by helicopter. That would mean a significant further delay."

Seatrade
Yntze Buitenwerf from Seatrade indicates that the direct consequences for Seatrade are not too bad. "Our next boat to cross the Suez Canal is in two weeks." Yntze assumes that the blockade will have been resolved by then. But even if the blockade is resolved quickly, it will seriously disrupt world trade. For example, he sees more requests coming in, because fresh fruit and vegetables from other origins are being ordered to be on the safe side to prevent the shelves from becoming empty. Another effect is that the containers that are ready for export are also no longer loaded. "In a little while they will be full." He expects that even if the blockade is lifted soon, it will take at least a month for the logistics system to run as before.

HMM
Ships from shipping company HMM are on hold as a result of the blockade of the Suez Canal and the shipping company is confronted with ships that are still underway and will soon have to join at the back of the queue, confirms Rob van den Eijnden. Based on the current reporting, he sees no solution for the short term and Rob expects the blockade to take another week. HMM is therefore looking for alternatives. These include circumnavigation via the Cape of Good Hope in South Africa. "That will take about five to six days longer than through the Suez Canal. But we will have to, connecting some at the back will take even longer." He indicated that there is sufficient fuel for the waiting ships and as long as the reefer containers are plugged in, the delay does not have to be problematic for all fruit and vegetables.

MSC
The Mediterranean Shipping Company said in a response to our editorial staff: “All major container carriers have been impacted by the MV Ever Given blockage in the Suez Canal, which is obviously a very important artery for global trade. As a frequent user of the canal, MSC is monitoring the situation very closely for updates in case any fleet or service network contingency plans would be required and to see how container circulation may be affected in an already challenging market. MSC customers with cargo due for transit the canal in the coming days should be prepared for potential schedule changes and we will communicate with customers as the situation evolves.”

Millions in claims
Sources in the shipping sector expect that the owner of the ship, the Japanese company Shoei Kisen KK, can count on millions in claims, reports Het Parool. Several ships, whose passage has been disrupted, would already have claims in the making. The Evergreen is likely insured for $100-140 million hull and machine damage, insurance brokers told Reuters news agency.