'Season for small citrus fruits consistently progressed toward its end'

The season for small citrus fruit was consistently coming to an end: both demand and availability were dwindling. In addition, the organoleptic properties of the offerings were dropping off visibly. Perfect quality batches were rare and therefore prices increased in various cases. Spanish Nadorcott and Orri mandarins predominated.

From Israel, only Orris came in. Morocco participated with small quantities of Nadorcotts. From Turkey, Murcotts were sent over. Clementines took almost complete leave from the scene: Only in Munich, there were still a few Spanish products, but they disappeared from the assortment in the course of the week 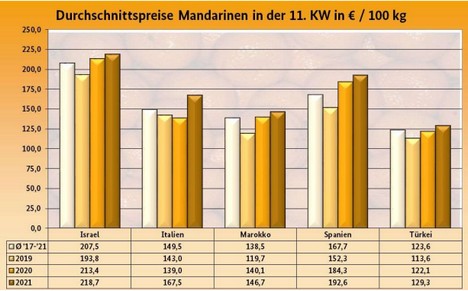 Apples
The range was still broad. Demand generally harmonized with supply, so retailers rarely had cause to modify their previous prices.

Pears
The presence of South African imports grew steadily. Availability expanded, but this did not fundamentally affect prices.

Lemons
The range consisted primarily of Spanish Primofiori and Turkish Lama. The supply expanded and was sufficient to satisfy demand.

Cauliflower
Deliveries from Italy increased, but not to the extent that French offloads became less important. Thus, availability narrowed.

Lettuce
Lettuce came primarily from Belgium. In some places, storage was not without problems, which had a negative impact on prices.

Cucumbers
The Netherlands dominated the scene, with Belgium and Germany playing a complementary role. Availability expanded, interest could be satisfied without effort.

Tomatoes
An extensive range was available, in which TOVs predominated. was handled without problems thanks to an appealing quality.

Sweet peppers
Spanish deliveries dominated and were usually able to meet demand on their own. However, Dutch and Belgian supplies increased, which had a selective effect on the prices of Spanish batches.