Overview of the 2019 Suspension Agreement on Fresh Tomatoes from Mexico

In a webinar held yesterday by the US Department of Commerce and the International Trade Administration, an overview was given on the 2019 Suspension Agreement on Fresh Tomatoes from Mexico. This was the first instalment in a two-part series on the agreement where the speakers gave a brief overview of the Agreement and discussed its key provisions. Tomorrow, Thursday March 25th, the second part will be held and the speakers will discuss how the Agreement is put to work. The speakers on the webinar were Sally Gannon, Director for Bilateral Agreements, David Cordell, Senior Import Policy Analyst, and Jesse Montoya, International Trade Specialist. 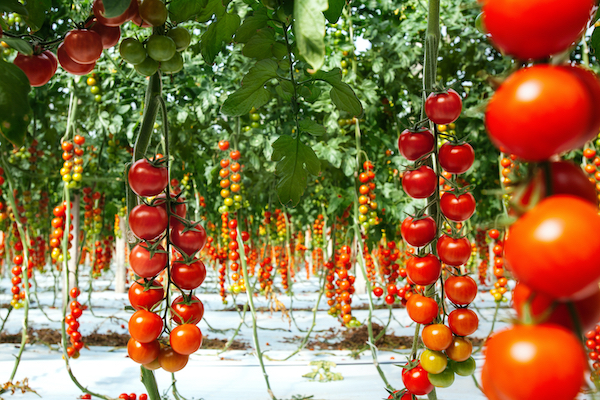 Background of the agreement
The context for the 2019 agreement goes back to 1996, Gannon explains. “In 1996, the US tomato industry filed an antidumping petition alleging that Mexican producers were selling tomatoes at less-than-fair value. Commerce began an investigation into the allegation, but this investigation was paused when Commerce and Mexican tomato growers entered into an agreement to suspend the investigation to avoid potential antidumping duties. In its place, they made a suspension agreement – which has been rewritten and updated several times. The 2019 suspension agreement is the latest version,” she says.

The suspension agreement is an agreement between Commerce and the signatory producers/exporters, who account for substantially all imports of fresh tomatoes from Mexico. While the agreement doesn’t have a scheduled termination date, it is subject to a review process every five years. The latest 2019 agreement has a few significant changes from the previous 2013 agreement, Cordell explains. “A few of the most important changes in the latest version include that there is now a reference price for organic tomatoes, there are consistent reference prices that apply year-round, regardless of growing season, there are revised categories with emphasis on type of tomato rather than the growing method, new procedures for rejected tomatoes, and finally stronger enforcement and monitoring methods,” he says. 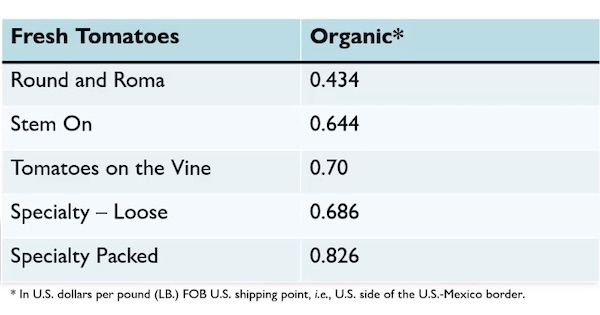 Reference prices and eliminating dumping
One of the most important aspects of the agreement is that of set pricing. “Each signatory of the 2019 agreement agrees that they will not sell their merchandise at prices that are less than the established reference price. The purpose of the reference price is to eliminate the injurious effects of exports to the United States and to prevent the suppression or undercutting of domestic price levels of fresh tomatoes,” says Cordell, adding: “The reference prices include all palletizing and cooling charges incurred prior to the shipment from the Mexican shipping point and the actual movement and handling expenses beyond the point of entry into the US must be added to the price as well.” 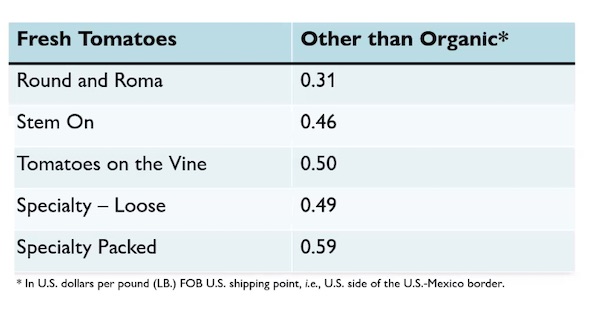 In addition to keeping to the reference pricing, signatories must sometimes even sell above the reference price. Montoya shares: “This is because they must ensure that for each entry into the US, the amount of dumping does not exceed 15% of the estimated weighted-average margin from the investigation that would apply to its entries – this is also known as ‘eliminating 85% of the dumping.’ The way this plays out is that there is a rate set by the most recent agreement – 20.91% - and that is multiplied by 15%. This gives us the result that any dumping for each entry in the United States may not exceed 3.14%. There are a few exceptions as some signatories have their own estimated weighted-average margin calculated in the investigation, and they must use their own rate rather than the 20.91% rate.” 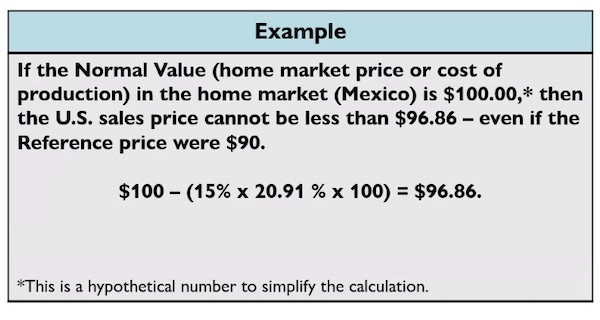 An example of how to 'eliminate 85% of the dumping'.

“So, in conclusion,” says Montoya, “when you are making sales in the US, remember to make sure your sales are at or above the reference price and that you keep track of your home market sales and your cost of production to ensure that every entry eliminated at least 85% of the dumping. You must sell both at or above the reference price and ensure that you are eliminating 85% of the dumping.”

The session that will be held tomorrow, March 25th, will look at the inspections, both near the border and destination, at the adjustments as a result of inspections, a brief look at the role of PACA, sales to Canada and sales for further processing. It will also provide an overview of the enhanced monitoring provisions of the agreement and will provide information on how to avoid violations to the agreement. To sign up for this session, email tomatoes@trade.gov and include your name, company/organization and email address.