Herb grower Johannes Adams on the start of the domestic season

"We are two weeks behind compared to last year"

The domestic herb season is currently getting underway. Small quantities of chervil, coriander and burnet are already being cut, the "official" start of the season is still a little longer in coming due to the cold weather, says Johannes Adams, owner of the herb nursery of the same name in Düsseldorf.

Still, it will take until Easter for things to go full throttle, Adams predicts. "We are simply waiting for nice, sunny weather, lagging two to three weeks behind in terms of quantity. We will be able to harvest the first sorrel in the field at the end of week 12, and following that we will probably be able to start with larger quantities of greenhouse herbs as well." 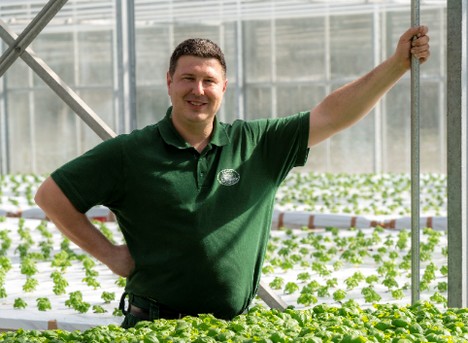 Johannes Adams is the 4th generation to run the herb nursery

Lack of demand from the restaurant industry
Due to lockdowns and gastro closures, Adams looks back on a challenging year. "We're missing demand from the foodservice industry, and it's already noticeable in sales. Some of the gastro suppliers we were serving have already dropped out. Meanwhile, the volume to be marketed from regional cultivation has increased," he says on today's developments within the herb sector.

For himself, the Düsseldorf-based grower also significantly expanded his production capacity last year. "We took over about half of the greenhouse facility of a nearby farm. We have thus been able to triple our cultivation area for mint. This crop - similar to parsley and rosemary - is very interesting for us and we are appreciated by customers because of the robust plant and good shelf life. Basil is somewhat more susceptible to disease and weather when grown outdoors, but it grows and thrives in the greenhouse without any problems."

High demand from regional retail
Until three years ago, Adams marketed a significant portion of his yields at the local wholesale market. Now, a diverse clientele - such as market riders, catering suppliers and food retail packers - buy produce directly from him. "The latter sales market has been gaining noticeably in importance in recent years. In addition, itinerant trade is now booming at times of crisis, which is why we have so far been able to almost compensate for the loss of sales in the catering trade," says Adams.

"However, the crisis will eventually lead to a rat race," he continues. Given the renewed rise in the number of infections in the Düsseldorf area, Adams said he does not have high hopes for a reopening of the regional gastronomy business any time soon. "I had hoped that the outdoor areas and terraces would reopen by Easter. In the wake of the current situation, however, we can only expect the first relaxations around May-June."