A symbolic "cremà" brings attention to the uprooting of 2,000 Valencian fields over the last year

The Spanish city of Valencia would normally be celebrating its Fallas festival this week, but with the festivities canceled due to COVID-19, AVA-ASAJA has aimed to give visibility to the severe profitability crisis currently affecting producers through a symbolic "cremà" (burning) of freshly plucked orange trees surrounded with posters and slogans, in a similar fashion to how Falla monuments are displayed. 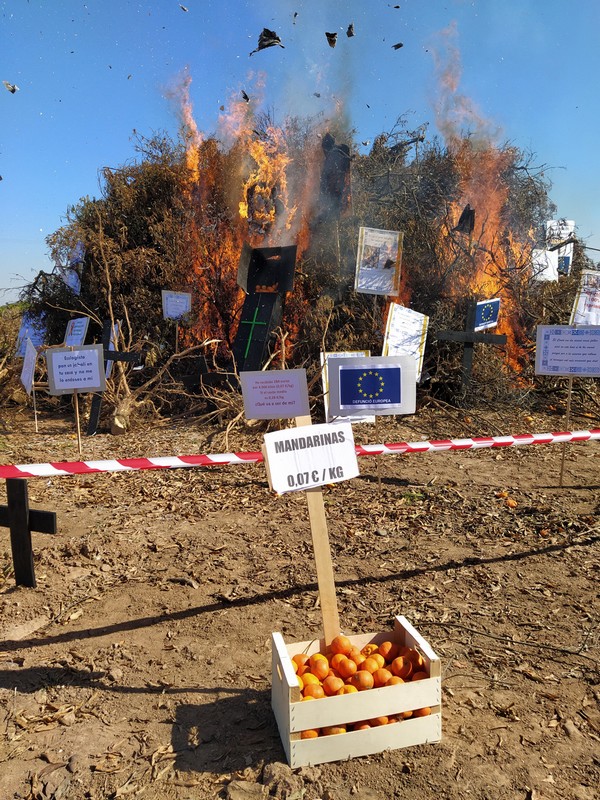 The president of the organization, Cristóbal Aguado, said that "this is just one example of the desperation felt by producers, since in the last year, more than 2,000 fields like this have been uprooted and burned in the Region of Valencia." According to data from the Spanish Ministry of Agriculture, the Valencian agricultural area has been reduced by 7% in the last decade and by 16% so far in the twenty-first century. The most common crops in Valencia are precisely those that have recorded the sharpest declines. The citrus acreage has been reduced by 30,000 hectares in two decades, while 25,000 hectares of vineyards have also been lost in that same period. "And now kaki fields are also starting to be uprooted because prices have fallen and we are losing half of the production because we are unable to fight pests and diseases," said Aguado.

Young AVA-Algemesí producer Ismael Navarro said that he has decided to uproot his orange trees. "Over the last five seasons, I have lost money in all but one, and in the last one I have only received 0.07 Euro per kilo, so I'm losing 20 cents for each kilo sold. That is unsustainable." 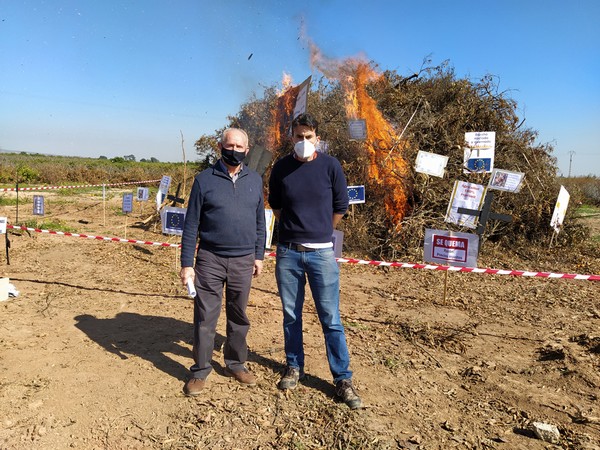 Before the symbolic cremà, Aguado announced that the agrarian organization plans to file a complaint to the Agency for Information and Food Control (AICA); a body under the Ministry of Agriculture. It will be asking for an investigation and, if necessary, the imposition of exemplary sanctions "against large retail chains such as Lidl, Alcampo and Carrefour because of their abusive offers for products such as citrus. At a price of around 0.50 €/kg for the consumer, the producer is left with just 0.07 €/kg, which is what Ismael received for his clementines. We believe that these are sales at a loss, which should be severely punished by the Law of the Food Chain.

Among the many demands of the Valencian agricultural sector, the head of AVA-ASAJA highlighted the need for "a reform of the Law of the Food Chain to make it truly effective, curb abuse from traders and ensure prices stay above the production costs. There should also be a review of the agreements with third countries to ensure reciprocity with the European productions, and more support and funds for the Law of Agricultural Structures of the Regional Government in order to modernize and improve the competitiveness of Valencian agriculture.