As spring is approaching dangerous pests begin to wake up after winter and start to threaten our orchards. The Asiatic stink bug is probably one of the most dangerous and rapidly expanding: its extreme mobility allows it to recolonize, in a very short time, all the areas that have been disinfected, thus making chemical controls less effective. It's also a polyphagous insect which eats a huge variety of fruits, though it will also consume other parts of the plant.

Then there's the codling moth, a lepidoptera which attacks apples, pears, and walnuts. The damage is done by the larvae, which feed on the fruit during every stage of their growth, causing huge losses in terms of production and quality of the harvested fruit. In the last few years all the major farmers, both traditional and organic, are trying more and more to limit the damage caused by such parasites by using insect proof nets.

Artes Politecnica offers a great variety of solutions in this sense, which allow growers to limit about 60-80% of the losses on monoblock structures and over 80% in monorow ones. Artes nets not only reduce the presence of the insects, but they also prevent the excessive use of chemicals on the crops.

These products have transversal features which can perfectly adapt to every type of installation, thus completely protecting the orchards from the damage caused by insects and also by hail and other atmospheric phenomena.

This makes it possible to protect all kinds of fruit and to go organic. Luigi Frigo, the owner of the family farm Casa delle Rose, located in Belfiore (VR) showed us the two solutions that he uses in his organic company to protect the fruit from these pests. According to him, they reduced by 50% the number of treatments used against the codling moth. 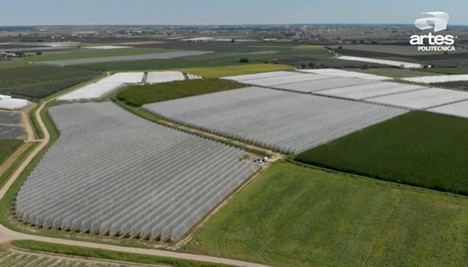 His son Giosué adds that they implemented the use of insect proof nets by creating a system in which they grow very high-quality fruit completely without the use of chemicals from the month of May.

In the monoblock system the nets allow growers to have an optimal thinning effect, which results in a higher quality of yield during the present year and a reduction of alternation problems in the following season. They also have an important role in lowering the internal temperature inside the installation during the hottest periods, thus helping pest control and further reducing the use of chemicals, all to the benefit of health and the environment.