Fruit and vegetables front of mind for Dutch consumer, less so for Polish

Covid-19 has strongly influenced the purchasing behaviour of consumers. In search of health and safety, the sale of fruit and vegetables in the Netherlands received a significant boost. The Polish market for vegetables shows an increase, but in volume sales of fruit fell slightly. A striking similarity is that in both countries, more than ever, groceries ended up in the shopping cart via the online channel. This became clear during the webinar 'Purchasing behaviour of Dutch and Polish consumers', organised by GroentenFruit Huis.

Purchases of fruit and vegetables from Dutch consumers

Fruit and vegetables seem front of mind in the Netherlands. With a growth of 11 percent, fresh produce is the growth driver in the total turnover of FMCG (+ 9%). The growth of vegetables (12.5%) is already higher than the fresh food average, fruit contributes the most with +18.1 percent. "A focus on health in combination with a change in lifestyle is driving this growth," said Eric Harmsen of GfK. Young people in particular have adapted their lifestyle. Due to a restriction of social contacts and eating out, they are getting out of their comfort zone. They have started filling their pantry and cooking more themselves. Young households without children bought 38 percent more fruit and vegetables in the fourth quarter of 2020 compared to 2019.

Physical supermarkets still have a very strong position in the market. Consumers make 80% of their purchases here, but all physical stores lost share of their turnover last year. The profit goes to online (growing + 56%) and the fresh specialty stores, growers and markets (+ 16%) with a market share of 6.5 and 7 percent respectively.

On average in the Netherlands, on a shopping trip, some fruit and vegetables end up in the shopping cart with half of the purchases. This mainly concerns fruit and vegetables, potatoes have a smaller share and are also growing less rapidly. Compared to 2019, the share of fruit and vegetables increased by 2 percentage points, from 50 to 52%. The expenditure on apples was highest, with an average of 36.43 euros per household. Kiwis showed the most growth (+ 29%). Tomato is top of mind within vegetables. A household spends an average of 31.63 euros on tomatoes. A striking grower with + 20% was the bell pepper.

After Germany, Poland is an increasingly interesting sales market for the Netherlands. Wilco van den Berg of GroentenFruit Huis indicated that Poland is the third largest market for sales of Dutch tomatoes, peppers and pears, after Germany and the United Kingdom. In Europe it is the 6th economy and in the CEE it isthe 3rd largest market. Although markets are under pressure due to Covid-19, GfK researcher Grzegorz Mech sees that Poland is developing well compared to other markets. Polish GDP in 2020 is projected to decrease by 4.6% compared to the previous year, but this is the least significant decrease within the EU countries (-8.3% on average). "The only problem is that we are a somewhat outdated market," said Grzegorz. 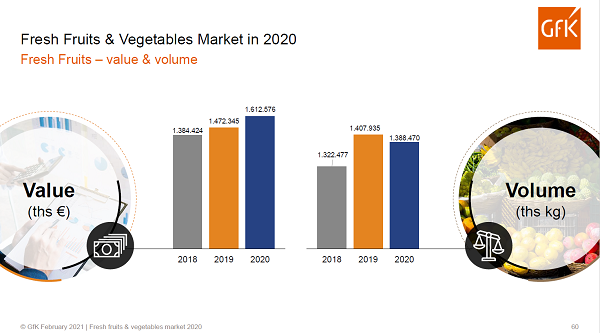 The top ten retailers in Poland have a market share of 60.52%, making it the most important distribution channel. The supermarket channel in Poland is very fragmented. As a market leader, discounters have further strengthened their position (= 15%), but the small local supermarkets also did good business (+ 11.7%). In pursuit of safety when shopping, online (1.4% market share), just like in the Netherlands, experienced unprecedented growth (+ 48.4%). The channel has great potential. 70% of new online buyers indicate that they want to continue shopping via online even after the pandemic.

The shopping basket of a Polish consumer consists of 10.7% fruit and vegetables and increased by 8.4 percent in 2020. It is notable that bananas are number 1 in value (18%) in Poland. In volume, the share of apples decreased (-12%) last year, bananas increased by 22%. The number 1 vegetable in Poland is the tomato, just like in the Netherlands. In market value, the sales of fruit increased by 10%, compared to a volume decrease of 1%. The market value of vegetables increased both in value and in volume by 6%

When looking at the trends compared to previous years, Poland still appears to be an attractive market for producers of fruit and vegetables. Although the volume of fruit purchases is decreasing in 2020 compared to 2019, the purchase value has increased. The purchases of vegetables in terms of volume and value increased compared to 2019. What is a challenge are the prices, Grzegorz concluded.