Start of the asparagus season:

First domestic and Greek shipments are coming onto the market

The 2021 asparagus season has definitely started. Parallel to the first arrivals from Greece, the first Bruchsal asparagus arrived at the regional wholesale markets on Tuesday, March 2. The first 'white gold' from domestic, heated cultivation as well as produce from Greece has met with with lively demand among wholesale customers. 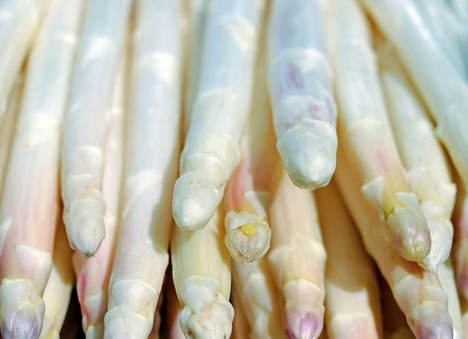 Similar to last year, the first German asparagus was offered at the Stuttgart wholesale market on March 2. Fresh German batches are now also being marketed at the Karlsruhe in Frischezentren and Mannheim.

Modest supply
Now at the beginning, the spears are usually somewhat thicker, as they were able to grow slowly in January and February. The supply to be marketed from regional, heated fields is rather modest, says a Stuttgart wholesaler. "During the peak season we trade 40-80 pallets of asparagus a day; now, at the beginning of the season it is about 10 boxes of local produce. But that also applies to Dutch and Italian goods. The lion's share of volumes still comes from Chile and Peru."

A significant portion of the regional asparagus yield goes through the Stuttgart wholesale market to the ambulatory trade as well as the food service industry. "One needs much less early asparagus now due to lockdowns and gastronomy closures. The latter is not expected to be allowed to reopen until the week before Easter, by which time larger quantities of asparagus will be available."

Greek season delayed
While the first domestic produce hit the market relatively early, the first arrivals from Greece, on the other hand, arrived exceptionally late. "This year's season opener is three weeks later than last year," said one specialized importer. The quantities are far from sufficient to cover the current demand. In line with the good quality, prices are at a good, average level.

Larger volumes from Greece are not expected until week 11. According to specialists, the overlap of the Greek and domestic seasons is rather advantageous. "As soon as domestic produce is available, asparagus comes into the consumers' focus. Accordingly, this also creates demand for Greek produce, because you can't serve the whole market with the modest, German volumes coming from heated cultivation."