“I think we'll have moved all our potatoes by season's end”

“The industrial potato market is finally slowly picking up. It seems supply and demand are somewhat in balance again. All these potatoes should have been moved by the end of the season," says Bart Nemegheer of De Aardappelhoeve in Belgium. "However, many growers are still struggling. The hospitality sector is still closed. So, they're not out of the woods yet. Non-contracted potatoes have low prices of about €0.75/ton. And storage costs are high. That means many free potatoes farmers are still in dire straits." 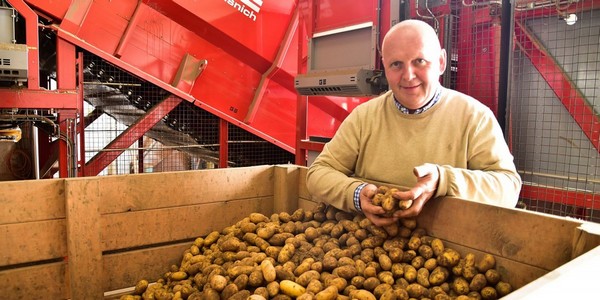 According to Bart, the coming season's situation will depend a lot on the weather. "Will the summer be extremely dry again? Or will this year's summer be normal? You can't predict the weather; we have to wait and see. The corona crisis will also play a role. I suspect things might return to 'normal' by the autumn. Many countries have rolled out vaccination programs. And, some, sometimes tough, important steps are being taken. We'll get there eventually."

CIPC use for potato storage has been banned since the start of the year. That's hugely disappointing for many in the sector. But, De Aardappelhoeve responded to this years ago. They switched to a different product. "We haven't used CIPC for fresh potatoes for years. The fresh market's residue standard is extra strict. We expected this ban."

"We're currently experiencing few problems. That's because we've been working with an alternative sprout-prohibiting agent for some time. There are good alternatives on the market. But they're much costlier than CIPC. That catches many growers off guard. And unfortunately, these costs aren't always included in contract agreements," concludes Bart.