The year 2020 was characterised by a weak first and a strong second semester. Kuehne+Nagel achieved a remarkably good result in an environment marked by crisis. Operational profit was above the previous year; total reported net earnings of the year decreased only slightly compared to 2019. 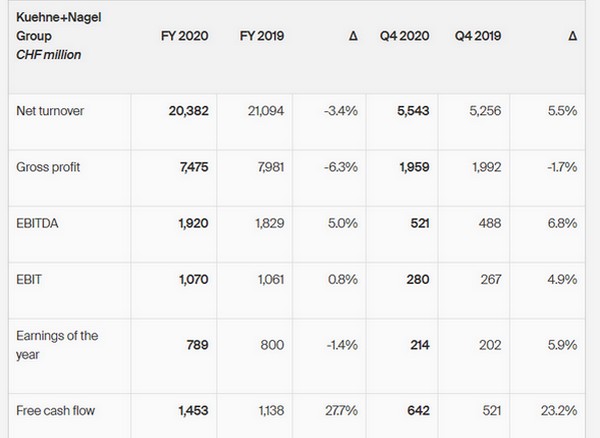 Net turnover of CHF 20.4 billion for the full year 2020 was below the 2019 figure due to lower volumes in the first half; EBIT, on the other hand, was almost one percentage point higher at CHF 1.1 billion. Currency fluctuations had a significant negative effect of -6% on both net turnover and EBIT. Free cash flow increased by 27.7%.

Dr. Detlef Trefzger, CEO of Kuehne + Nagel International AG, says: "Last year we proved what makes Kuehne+Nagel successful: within a very short period of time, we adapted to the volatile market environment. We won new business and at the same time were able to position ourselves as a reliable and responsible partner for our customers and suppliers."

The profit development of Sea Logistics recorded a very pleasing turnaround in the second half of 2020 compared to the first half of the year. Particularly in the fourth quarter, the improvement was due to the renewed increase in demand from customers in the SME sector as well as the increase in imports from Asia to Europe and North America – an extension of trends which first emerged in the third quarter.