The NFF has set a target of achieving $100billion in farmgate value for Australian agriculture by 2030, and speaking at the ABARES Outlook 2021 conference, President Fiona Simson admitted that on current trajectory estimates there could possibly be a $16billion shortfall. However, spirits were boosted when the Australian Bureau of Agriculture and Resource Economics and Science released its forecasts, which show farm production to total $65.9 billion in 2020-2021, driven by strong commodity prices and improved seasonal conditions.

"In the conversation about other countries and competitiveness, the thing that still sets us apart is focusing on what we can do best," Ms Simson told the conference. "That way we capture the best prices and capture the most value. We do that by understanding the product we deliver; we are not like the big bulk producers such as South America and other parts of the world. We are niche producers, but what we do produce we can be sure about and very confident about its quality and traceability. That's where we capture the value and we can keep capturing the best prices available. Also looking at diversifying so that we are not quite as dependent on price fluctuations." 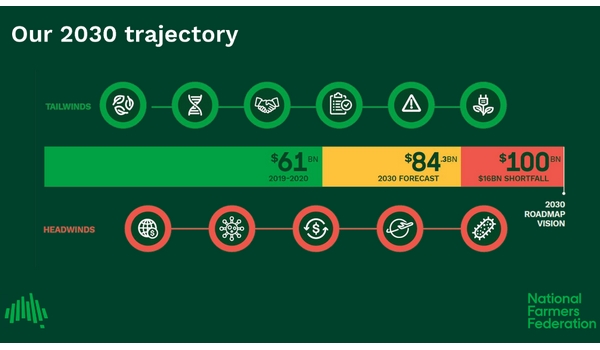 Among the changes needed to ensure the target is reached, according to the NFF, are measures to counter trade disruptions which are forecast to cost $36.9 billion this decade.

"The NFF is calling on the government to develop a long-term trade strategy that deepens access to existing markets, diversifies export destinations, improves supply chains and builds domestic value-adding capabilities," NFF Chief Executive Tony Mahar said in a press release. "Biosecurity is also key to maintaining and expanding our export markets. Alarmingly, our current system risks not being up to the job, without adequate investment in its expansion and modernisation. The cost of a single outbreak of disease or pest has been conservatively estimated to exceed $50 billion."

Also speaking at ABARES Outlook 2021 was Sarah Hunter, Chief Economist at BIS Oxford Economics, who has been monitoring international trade, especially involving China. She has noticed markets shifting in recent years due to trade tensions involving the Asian country, which could provide both opportunities and risks for Australian producers.

"That is substantial because if China absorbs imports from other countries, that leaves other markets open," she said. "We have seen that trade dispersion switching - that's already happening. Commodities most exposed are those that are ones where we are a relatively small global supplier, in that we don't have the same market power and China can easily go elsewhere. So, it's harder to find new markets and those are the commodities that I am concerned about." 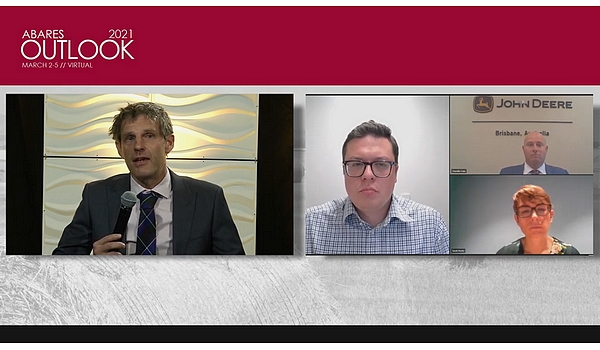 Luke Chandler, Managing Director of John Deere Australia/New Zealand also noticed the market shift, but noted Australian agriculture exports so much of its product, compared to other larger developed nations, such as the United States, which also has a large domestic population.

"Australian producers that rely on 60-65 per cent of their product going overseas, and China being a large destination for a lot of those commodities, it is going to take a lot of time and effort in order to find other homes for those products," he said. "So, there's a lot of uncertainty and risk for Australian agriculture if those trade tensions continue to escalate."

Peter Gooday, from the Farm Performance, Biosecurity and Information Branch at ABARES told the conference that staying "ahead of the pack" in terms of productivity has become difficult for some Australian farmers, with increasing competition from certain countries.

"We pretty much keep pace with other industrialised countries and outpace some of them; USA, Canada, some European countries and the like," he said. "Some of the developing countries are starting from a much lower base, so their productivity is increasing pretty quickly as they are adopting machines. They have challenges ahead of them, though, in terms of infrastructure such as ports and roads - but you can expect our competitive advantage will continue to be eroded by them catching up and leapfrogging. Increasingly for us, it is going to be about making sure we are investing in research and development, staying ahead of the pack by adopting the latest technology and traceability systems. Being able to describe the providence of something and having someone believe that will be important." 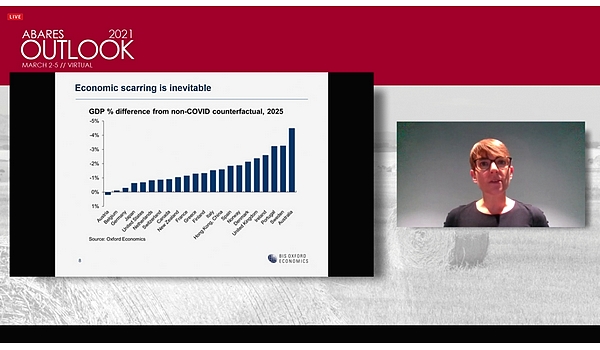 Ms Hunter also notes that more certainty will return to economic markets with the introduction of the COVID-19 vaccine, particularly in Australia, which has had travel restrictions banning the vast majority of international departures and arrivals.

"It is a necessary condition for returning to normal both here in Australia and across the global economy," she said. "But, rolling out the vaccine will not mean that track and trace will end, isolation can end or the border can just re-open and go back to what it was, pre-COVID. What it will do is provide some more certainty around the domestic outlook, so we won't need to be concerned if we get an outbreak from hotel quarantine because most of the population would have been vaccinated. We won't see the snap lockdowns that we have seen, and we hope that state borders will remain open for business and leisure travel. But clearly, those businesses that are exposed to international arrivals will continue to struggle."