UK growers held potato stocks as at the end of January sit at 2.11Mt, 39% of total production.

The 2.11Mt of potatoes in grower ownership at the end of January is 47.4Kt lower than in January 2020, but 40.86Kt higher than the 5-year average. Of this, 61% is already sold, either on pre-season contracts or as a forward sale.

The stocks figures do not account for potatoes held by packers, processor, merchant’s etc.; it is only representing what was on-farm as at the end of January.

Regional swings
On a regional level, there are some differences in the data. Scotland accounted for 29% (608.7Kt) of what remained in grower ownership at the end of January. This represents almost half of total Scottish potato production still in store and more than at the same point last year. While there was a slight uplift in production in Scotland, much of the Scottish area grown is for Seed production. Therefore, slower seed sales may account for some of this volume. There have been reports that many growers delayed their seed orders this year whilst deciding what to plant, seemingly awaiting some positive news for the industry as the coronavirus story pans out.

Despite 31% of potatoes in store being situated in the East of England and East Midlands, the combined volume (657.2Kt) is lower than the same time last year. The rate of movement from grower ownership between end-November and end-January was 178.4Kt greater than the same period a year ago. 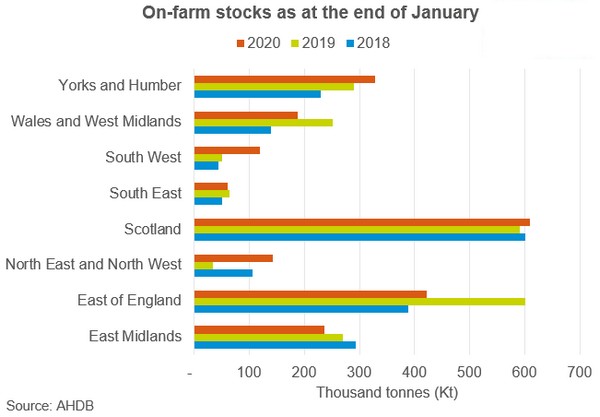 The North East and West region record greater volumes of potatoes still in grower ownership than at end-January 2020. However, this is not entirely unexpected. Last season brought considerable lifting difficulties to this region in particular, likely resulting in much of the crop lifted late in the season, to be sold straight from the field. Much of the 2019 Northern crop was unable to be stored for long, resulting in lower than usual stocks.

This week, markets have been reportedly quiet. Repeat orders have been the majority of trade. Movement of contracted material continues to meet a lot of the present demand. 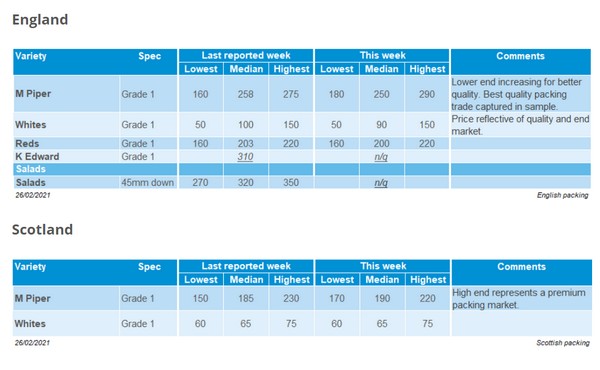 A return of warmer weather and blue skies to parts of the UK over the next few days will help to dry fields, enabling fieldwork to continue in preparation for the planting season. Reports suggest some have considered reducing potato acreages.