Italian shipments still dominated the market: Abate Fetel and Santa Maria were at the forefront, while Williams Christ and Boscs Flaschenbirne complemented these. The volumes delivered from the Netherlands were limited, with only Gute Luise gaining a little in importance. Belgium participated in the marketing with Conferences.

From Germany came Conferences, among others, which increased in price in Cologne. Turkey primarily sent over Santa Marias and subsequently Devicis. Demand was not particularly strong and was easily satisfied. Prices often remained at the previous level, as the supply had been sufficiently matched to the accommodations.

Contemplated price increases could not be implemented in Berlin due to insufficient customer awareness. In Munich, prices of Italian fruit initially fell, rather they rose again slightly towards the weekend. The South African campaign picked up speed, as the first Rosemarie and Cheeky have arrived, complementing the already established Bon Chretien to a lesser extent. 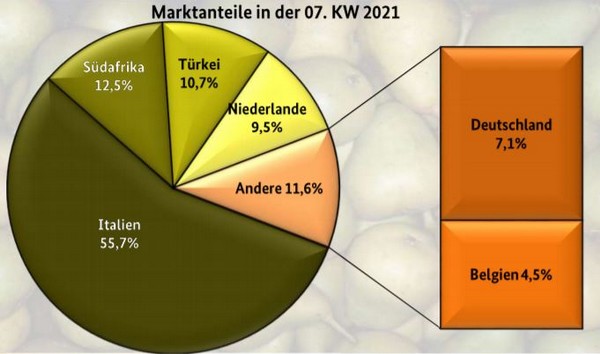 Apples
Native Elstar, Jonagold, Pinova and Braeburn obviously were predominant. Demand did not change significantly. As a result, traders hardly had to modify their prices, as availability was sufficient to meet demand.

Oranges
Blonde oranges were obviously dominated by Spanish shipments. Prices developed differently: those of the Spanish items most often dropped due to the volumes.

Small citrus fruits
Spanish goods still predominated for mandarins: Clemenvilla and Nadorcott played leading roles. From Israel, as usual, came Orri, which continued to impress in terms of quality, being quite popular with customers.

Lemons
Although availability was slightly reduced, it was sufficient to satisfy demand completely. Sales were slow.

Bananas
Business was quite good. Sales improved in some places, as spring-like weather increased demand. However, availability was sufficient to meet the demand without effort.

Cauliflower
Italian and French goods dominated. Demand was met without difficulty, although supplies had not changed significantly.

Lettuce
Iceberg lettuce came in exclusively from Spain. Availability was sufficient to satisfy the demand. Towards the weekend, demand intensified, so that prices increased slightly here and there.

Tomatoes
There was an abundant assortment available, which again increased in volume. The demand could not keep up with the intensified deliveries. The lack of acceptance from the catering sector was clearly noticeable, and demand dropped significantly.

Sweet peppers
Availability had reduced slightly, but was sufficient to satisfy interest. Spain dominated, followed by Turkey in terms of importance.