The World Apple and Pear Association (WAPA) has released the Southern Hemisphere apple and pear crop production forecast for the upcoming season. According to the forecast, which consolidates the data from Argentina, Australia, Brazil, Chile, New Zealand, and South Africa, apple production is estimated to increase by 6% in 2021 compared to the previous year, while pear production is projected to stabilise.

The World Apple and Pear Association (WAPA) has released its 2021 apple and pear crop estimate for the Southern Hemisphere. This report has been compiled with the support of ASOEX (Chile), CAFI (Argentina), ABPM (Brazil), Hortgro (South Africa), APAL (Australia) and New Zealand Apples and Pears, and therefore provides consolidated data from the six leading Southern Hemisphere countries. WAPA’s Secretary General Philippe Binard commented on the usefulness of gathering the insights from these major producers: “Elaborating this collective data has previously proved a valuable exercise for the global apple and pear industry and a reliable source of information when the season progressively shifts from the Northern to the Southern Hemisphere.” 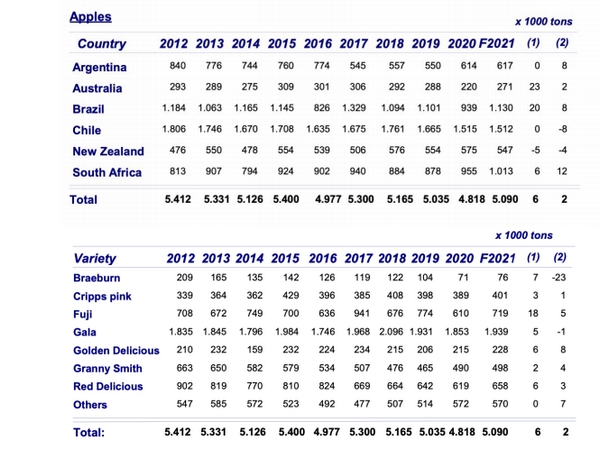