In 1998, Dutchman, Nico Schaft, took the first French pumpkin seeds to South Africa. Over the years, many followed his example. These weren't hybrid seeds, so propagation was easy. There were good and bad years. But Nico continued offering South African pumpkins. This year even earlier - 888 Fruit Company's first Crookneck pumpkins arrived at Cool Control in the Netherlands last week already. "We usually only start at the beginning of March. However, I heard the French, and Portuguese pumpkins' quality wasn't great. So we started early." 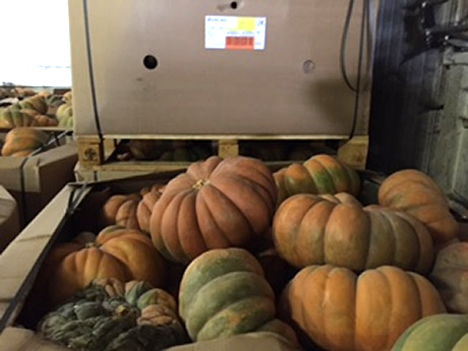 "In South Africa, they plant pumpkins in November. These grow for 60 to 70 days. And then, after a few days of drying, they can be shipped. The products we're getting in have excellent quality. We're getting Crookneck pumpkins now, and Hokkaido pumpkins will also come in later. Whether we'll start with butternut squash remains to be seen. In recent years, Brazil has sent a lot of these squashes. They're now so low-priced, it's hardly interesting to import them. These sell for €0.70 in Europe. That covers only our cost price."

According to Nico, pumpkins are a stable sales item across the board. He's had a spot at the Parisian Rungis wholesale market for years. "Many people eat them, especially with Ramadan. That starts on 12 April this year. Like watermelons, they're very nutritious. We'll receive pumpkins until the end of May. We continue to import them. Last year was a bad year for pumpkins, so we're getting some more," he says, laughing. "But the general trade is currently very quiet. Many people are literally looking for a change of scenery. That because it's school holidays."

The 888 Fruit Company doesn't only carry pumpkins. Nico also sells Chinese Crown Nashi pears. "These were hard to get for a long time. That was due to problems with sea freight availability. Now, however, we're getting sufficient volumes. We offer these pears in 5 and 9kg boxes. We sell most of these pears to Chinese wholesalers. But also increasingly to chain stores, especially here in France," Nico concludes.