Fewer orange imports to Italy in 2021

After a slow start of the Italian orange campaign, FreshPlaza analyzed the first half of the season with the help of one of the leading players in Italy - Nello Alba, CEO of Oranfrizer, part of international group Unifrutti. We discussed the production of Sicilian oranges, small grades, imports from extra-EU countries and much more. 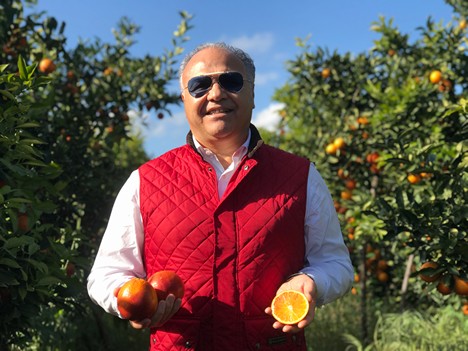 "In 2020, we witnessed an increase in citrus fruit imports and oranges in particular. This was due to a lack of volumes available from Sicily, as the campaign ended rather early. The same will not be happening in 2021, as volumes are sufficient and sales are proceeding well."

General market drop in favor of retail channel
"Sales in the general markets have dropped this year in favor of the big retail chain which, in light of the Covid emergency, is more structured and better oriented towards final consumers. We expected consumption to be higher in 2020/21 as people looked for products with a high vitamin C content, but things have not changed much with respect to the previous year."

When business does not listen to nature
"There are a lot of complaints when it comes to grades, although they depend on nature. What cannot be considered a natural variant is the snobbish attitude of some buyers towards small grades. It is essentially a way to unjustifiably depreciate the value of a product that is still prestigious despite its size. We would have to understand what determines the value of an orange starting from its net production cost, which varies between 25 and 35 eurocents per kg. To this, we must add around 65 eurocents per kg for harvesting, transport, sorting, processing, packaging, logistics and packing costs to obtain the final price. This is the point I suggest starting from."

"Despite the controversies when it comes to grades, quality this year was slightly lower than usual, although the difference is only perceivable by experts. The weather, characterized by persistent rain in the fall of 2020 with frost in January 2021, was not favorable. So far the season has been similar to last year but, from March onwards, things will be different as, in 2020, consumption skyrocketed due to Covid-19."

Exports and what is new for Oranfrizer
"We have become part of Unifrutti and the new asset has had great effects on the territory where we operate. Unifrutti will help valorize red produce in particular - from tomatoes to Sicilian blood oranges. Exports continue to give us great satisfaction, especially those to the UK and Scandinavia. We have noticed some interest from Germany as well, which is starting to understand the added value of Italian productions. Last but not least, although the H&R sector registered a 70% drop last year and a 50% drop this year, the trend is positive for Oranfrizer juices, for which consumption increased so much that we are left with no stock!"