Seed exports stayed strong in December ahead of EU-exit

The latest HMRC trade data covers up to December 2020, the end of the transition period. Seed exports continued to be strong, compared to previous seasons. Fresh exports, in December alone, also saw an uplift.

Export
Total exports for the first half of the season (July-December) were down slightly (4%) year-on-year, but up slightly (3%) versus the 5-year average.

Seed exports, at 81.23Kt (July-December) were up 17% compared to the 5-year average for the time of year, but this is not unexpected. Seed exporters likely pre-empted issues with seed movement into the EU after the end of the transition period. Therefore, where possible, this resulted in some exports brought forward to avoid issues.

Fresh exports, July-December, are still behind previous seasons, although December trade actually saw an uplift. During December, 19.16Kt of fresh potatoes were exported from the UK. This is up over 3.10Kt compared to December 2019 or the 5-year average. The impending end of the transition period likely factored here too. Although fresh ware potato exports are able to continue post 1 January, this was not known until almost the end of December. The big driver behind the uplift in fresh exports in December was exports to Belgium. 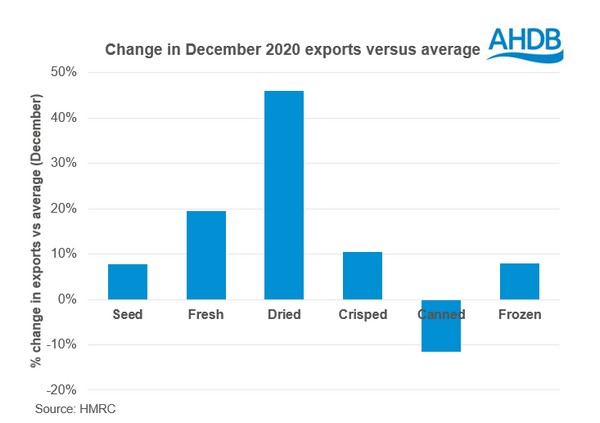 Exports of processed* potatoes increased in December from November. This continued to push the season-to-date (July-December) volumes higher than a year before and the 5-year average. The key destination for processed exports was the Irish Republic.