In the past week, VTA has had the second stock inventory for onions carried out among its members for the 2020 - 2021 season. The main conclusions at the moment are: The participants delivered about 51% of the onions. Around 31% of the stock has been sold. The free stock is more than 10% lower than the long-term average. 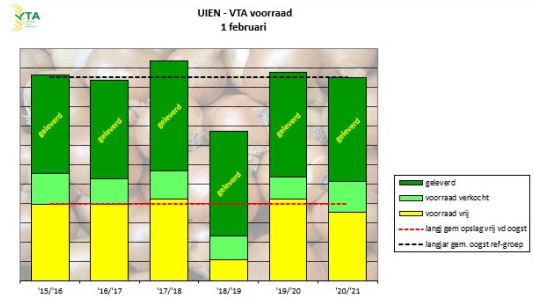 Absolute stock in relation to the supplied tonnes

Due to the successful export, you might expect the number of tonnes delivered to be slightly higher. In the export figures, however, a considerable share is supplied from non-traditional growing areas, where a relatively large part has been supplied direct from the field, while a volume of onion sets has also been exported.

Stock lower
In absolute tonnes, the participants have 4.3% less stock than last season. This is 3.5% less than the long-term average. 31% of the stock has been sold. The absolute free stock is thus coming out at 15.2% lower than last season. This is approximately 10% lower than the long-term average. Furthermore, it is expected that net tonnes will be slightly lower in practice due to the quality problems in some of the stock.