The Embassy of the Kingdom of Netherlands hosted the launch of a capacity building project for smallholders potato growers in Punjab.

Supported by the Netherlands Enterprise Agency (RVO), the two and a half years project is meant to help increase productivity and sustainability of 960 smallholder potato growers in four core districts of Punjab (Sahiwal, Okara, Kasur and Pakpattan) with special focus on strengthening the role of women. The project will be implemented by the Center for Agriculture and Biosciences International (CABI) and leading Dutch agricultural institute - Wageningen University. 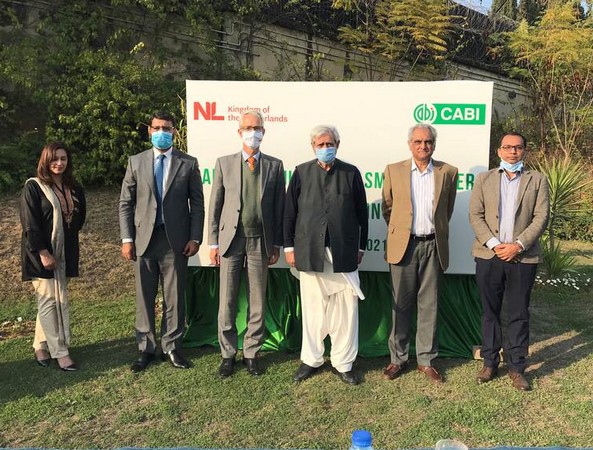 A group photograph after the launch of capacity building project for smallholders potato growers in Punjab / Image: Netherlandsandyou.nl

In his welcoming remarks, Dutch Ambassador Wouter Plomp said that food security is a growing concern globally, especially in this region due to impacts of climate change and rapid increase in population. “Meeting up with nutritious food demand is a challenge for Pakistan, and the Netherlands has knowledge, technology and skills to help Pakistan overcome these challenges. For instance, Pakistan imports 13.000 metric tonnes of seed potatoes from the Netherlands per annum”, he added.

The Federal Minister for National Food Security and Research appreciated the support of the Dutch government in building the capacity of farmers, and expressed the commitment of the government in strengthening the agriculture sector as it is the backbone of Pakistani economy. Acknowledging the achievements of the Netherlands in agriculture and being the second largest exporter of agri- products, the minister hoped the Pakistani farmers will acquire techniques and skills to enhance their productivity.