Italian and French shipments accounted for almost equal shares of the business. Furthermore, Spanish products were only available in Frankfurt and Belgian products only in Cologne. Greek products were only available in Berlin. In some areas, the quality of the goods could have been better. As a result of the wintry weather, demand intensified; accommodation improved in some places.

As a result, prices trended upwards in some places, albeit only moderately. From time to time, however, the price increases did not last until the weekend, so that prices then dropped slightly from Thursday onwards. This could be observed in Berlin, for example. Hamburg, on the other hand, saw strong price rises. 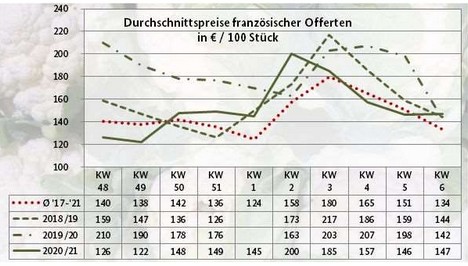 Apples
Local batches predominated, followed by Italian ones in terms of importance. The availability of French shipments dropped and imports from Kosovo also decreased. Belgian goods only came in to a small extent.

Pears
The winter weather generally weakened demand. All in all, trade was rather slow, but this did not have a fundamental impact on the prices.

Table grapes
The presence of South African imports expanded steadily. The cold weather slowed down the turnover. Concessions were therefore needed if stocks were to be avoided.

Oranges
The relevance of Spanish navalina was obviously limited; in some markets their season had already ended. Instead, Navel, Navelate and Lane Late increasingly arrived from Spain.

Small citrus fruits
The presence of Spanish mandarins was limited, but they still formed the basis of the offer. Israeli Orri were popular with customers, leaving little to be desired in terms of quality.

Lemons
The cold weather increased the demand, which could nevertheless be satisfied without any problems. Distributors rarely had a reason to modify their previous prices.

Bananas
Business was rather mixed: in some places the low temperatures limited interest, but access also intensified locally.

Lettuce
The wintry weather had an impact on business, as many weekly markets did not open. The supply had not changed significantly, but the sales opportunities became smaller.

Cucumbers
Deliveries of cucumbers from Spain decreased. In general, the demand could not be fully met. This of course affected prices, as traders then raised these.

Tomatoes
A very rich and varied assortment was available, but its volume had slightly decreased. Demand was not particularly strong and could be met without difficulty.

Sweet peppers
Spanish goods dominated over Turkish ones. Returns from the food retailing sector impaired the handling of freshly arrived goods in several cases, so that the sellers had to grant discounts if they wanted to avoid being left with stocks.